The barrel made with cost in mind
There are a metric ton of options out there when it comes to barrels for your paintball gun.  There are not a metric ton of cheaper options for your paintball gun unless you want something that's either 10 years old or a one piece, throwaway barrel that came stock on an equally cheap marker.  Inception Designs is trying to change that.  In steps their new barrel, the Genesis, for a mere $40.    So how do they do it, and how is the build quality?

Genesis on-gun
To understand the Genesis, it helps to have a little background on the Stella, Inception's flagship barrel.  That barrel comes with backs of 6 varieties, with bores every .005 starting at .675 and drilled for both freak and freak XL inserts.  They have a variety of tips as well, with options ranging from spiral porting, to straight porting with screw on tip extensions, to carbon fiber barrel tips in custom lengths.  In other words, the system has a lot of backs and tips for options, and allows for you to customize the barrel in several ways.

It's a very popular barrel, with long control bores, great finish, and a lot of porting.  They are threaded for the most popular markers on the market, and come standard on Inception's full builds.  Great barrels, and one that I've shot one of my own markers.  For a single stella barrel back and standard spiral ported tip, you're looking at $69.99.

Stella Barrel, stock on the ID Twisters from Committed Paintball
The Genesis, in comparison, is only $39.99.  So what's the difference, and how do they manage to shave $30 off the cost, almost cutting it in half?  Good questions.

What's in the Box?!?
The first area that they save some money is in the packaging.  Instead of plastic tubes, the barrels come in a pair in a box, and are sealed in plastic bags.  Honestly, I actually like this more than the standard tubes and cases that the stella comes in, or that freak tubes come in.  Why?  Because I can recycle them, versus throwing away those tubes that I am sent, and feeling bad that I don't have a use for them.  So, it's cheaper and better for the environment, and it's something that I get rid of as soon as I get anyway.  I know.  Small thing, but I actually do like this more.  I'm sure a lot of players won't care one little bit.
​

How it comes to you
Once you pull it out and unwrap the front (tip) and back, you see the whole barrel.  You'll notice a few large distinctions between it and the Stella kit.  The first and most obvious difference is that you get only the dust version of the Henry Ford color wheel.  It's any color you want, so long as it's black. 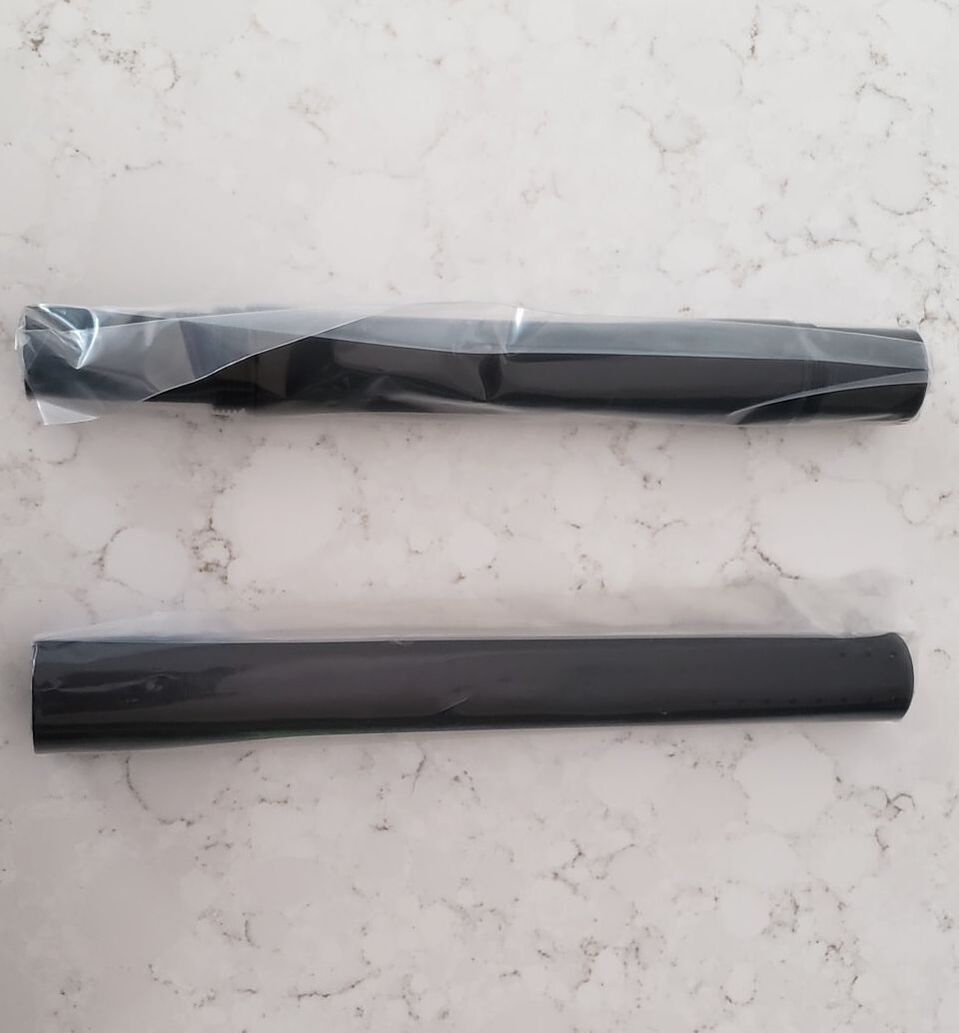 Sealed in plastic
The next thing that you'll probably notice is that there are no flats on the back of the barrel, unlike the Stella systems.  They likely did this to both differentiate the barrels, and again, keep costs down.  Each of those flats is more time on a mill, so it's counter-productive to try to add them if you want to keep the price low.

Ready for a close up
Another thing that you'll notice are the holes---or lack thereof, both in the tips and the backs.  The backs do not have the holes on the extended areas that slide into the tips like a stella, and the barrel tips have a lot less porting.  Stella barrels are some of the most heavily ported on the market.  These are not.

Inception also did not brand these quite as heavily.  There is only one logo, and it's not milled in all that deeply.  It's actually barely visible from even a few feet away.  Again, these changes all mean less time on machines, and the finish means less time in ano prep, which means less cost.

With my Emek
So How Does It Shoot?
The important part---how does it shoot, and how does it compare to a stella there?   In terms of consistency of shot, it shoots just like a stella.  That's a positive, and a compliment.  It's also a great thing for a $40 barrel.

There are two other major differences.

It is a lot louder.  And it should be.  There is nowhere near the amount of porting on in the barrel tip.  It is very important to mention that these barrels are 100% compatible with the Stella.  That means that you can, should you later want to, grab a different tip, all of which are more heavily ported, and it will quiet your marker down considerably.  But yes, this barrel is significantly louder.

The other difference is the barrel back size itself.  Much like color, it comes in any size you want so long as it's .686.  These aren't even labeled, because it's the only size.  And I thought about why that might be for a moment, and it actually makes a good amount of sense.

That bore size is too big for a closed bolt---aka cocker---but that's not who this is targeting.  Cocker builds from the ground up are expensive, and if you're building a $1500 cocker, you probably aren't getting a budget, one size barrel.  You're getting a kit, which is the Stella's market.

If you have an open bolt marker like 90% of paintball, your most accurate shot comes from either an over or underbore (paint matching actually gives the worst accuracy, per scientific testing).  Since you can't know what small size paint a field is going to go with, you likely want to go overbore if you only have one size.  Testing also shows that you do want to stay within .oo5 or so for best results.  A .686 bore size covers a wide swath of paint for best results.  In other words, this should keep you in the sweet spot for consistency with modern, tiny paint.

And again, the barrel is fully compatible with the Stella.  If you want to go with other sizes down the road, you can definitely do that.  But you don't need to right away, and you don't need to spend more than the $40 to get good performance from the barrel.

Right price barrel for this marker for me
Conclusion
So is it worth picking up?  If you're looking for a low cost, high quality barrel, this is tough to beat.  You can upgrade it down the road if you want to, and it should shoot well on most modern markers.  Is it the best barrel ever?  No,  but it's not supposed to be.  It's a barrel that can help you decide if you like Inception's barrels, and if you want to upgrade down the road, you can.

That's why I call it the gateway barrel.  This is your first taste on the cheap.  If you decide it's for you, the stella kit works with it and you can go that route later.

It is a really good option for budget builds, like the Emek above.  I would definitely recommend giving it a run for those that are building a marker with cost in mind, but that want to have something that they know was well thought out and executed.  And down the road, if you like it, you know that you have other options.  The Genesis doesn't cost much, has a very good build quality, solid looks, and shoots well.  And that's more than most barrels that cost $40 can say.  For low cost markers and builds, you really aren't going to do much better.