I'm writing this almost out of a sense of duty, as there are very few of these in the wild, and even fewer that build and understand them.  I happen to be one of those that do, and get asked about them all the time.  So I wanted to explain why the LPR is on the wrong side, what those extra hoses do, how they work, where they keep the magic gnomes that power them, and why they're the most fun you can have with your pants on.  Or take them off.  I don't know.  I'm not the boss of you.

​Let's jump right in.
The hell is that?!?
That's usually the first reaction I get from players and refs walking by immediately after they see and here one of my markers shoot.  As the title makes pretty obvious, it's an autococker with a reactive trigger.  What exactly does that mean?

Simply put, it means it's a mechnical autococker that kicks back the trigger after you pull it, and allows you to bounce the trigger and shoot full auto.  There are two flavors to pick from, with one being a continuation of the other. 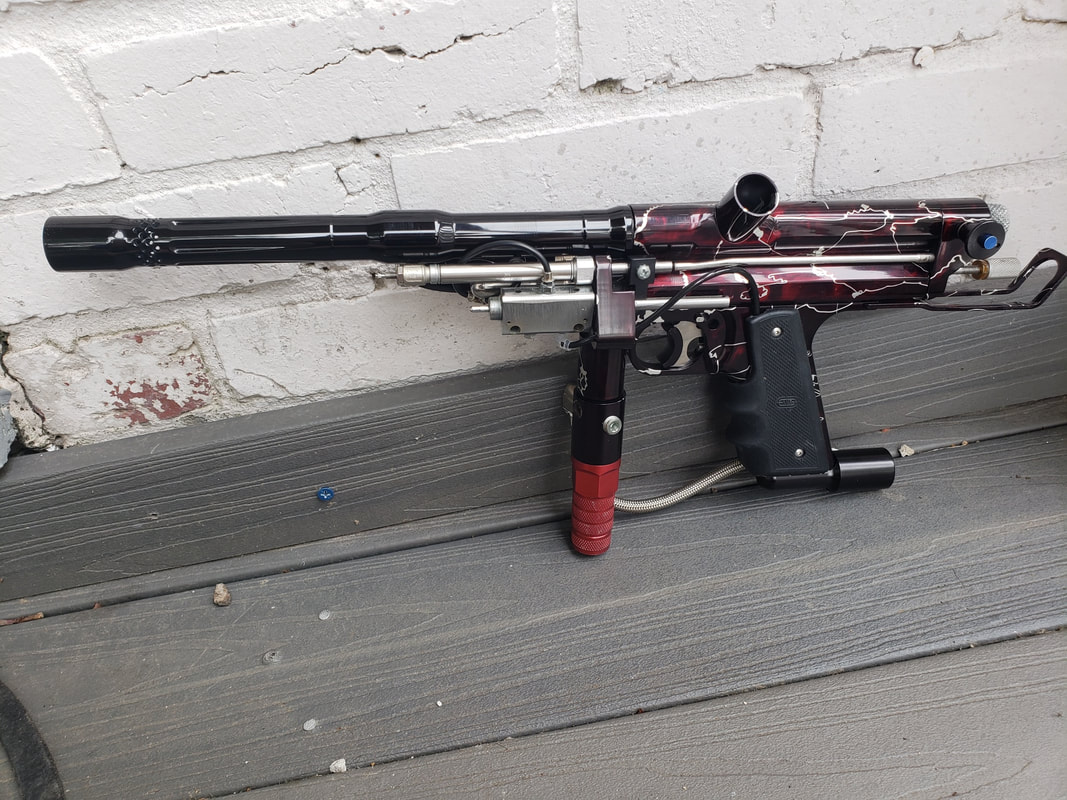 The first mechanical R/T using a trigger ram
What you're looking at is the prototype of the Boston Paintball Reflex kit.  While a lot of people recognize the Green and Black vert feed that had it's coming out party at Skyball, which was then shut down by the fun police, this is the actual prototype.  So where did it come from?

If you guessed literally any paintball player, you would be wrong.  In actuality, it was the brainchild of a friend of a paintball player who happened to be a mechanical engineer.  He took the Rube Goldberg machine of paintball, made it more complicated, and somehow also made it even more awesome.  So what did he do, and where did he store those magic gnomes (hint: it's not where you think)?

What in tarnation?!?
The Boston Paintball Reflex kits consisted of several custom parts.  The most obvious parts are the larger front block, longer ram, large 3 way, slotted rod, air pressure splitter, delrin tang, drilled pump rod, slide check on/off, and modified trigger frame.  Less obvious are the longer cocking rod, jam bolt, and ram behind the trigger.  I can only assume that the engineer thought of all of this during a fever dream involving peyote and a naked Indian. 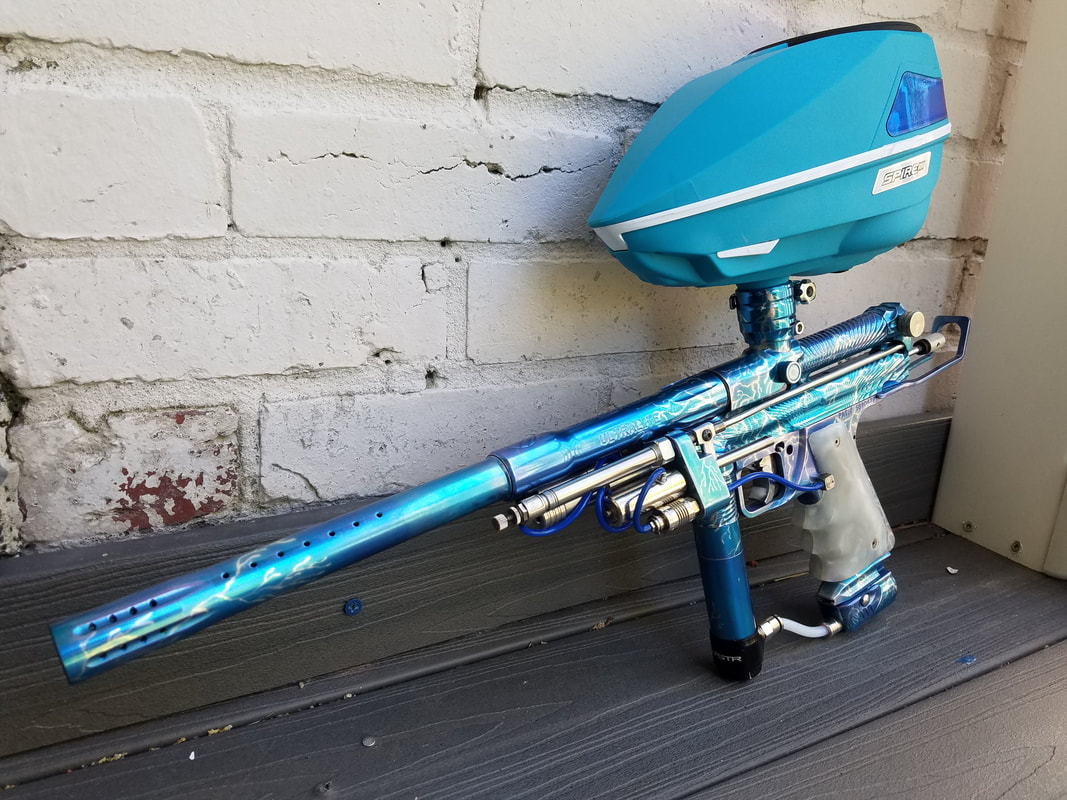 An original BPS Reflex on my F5 TWSTR
This wild assemblage of parts all works together to do one thing---speed up the reset of the trigger after you pull.  That's all it actually does.  The side effect it allowing you to sweet spot and hold your trigger in place to rip those strings.  So how does it do it?

We Have the Technology
If you don't know how to time a cocker yet, read the guide now, or just pretend that you do, nod along, and keep pressing forward.  As you might guess, the first operations of these markers are the same as every other autococker.  When pulling the trigger, you set off two distinct operations.  The first operation is dropping the sear, sending it forward face-first into the valve stem, opening the valve.  This makes, and I'm using the technical term here, the paint gun go boom-boom.

The second part of the trigger pull throws your 3 way, switching air from the from the back (closer to you) of the ram to the front.  This is where the first custom part makes it's presence known.  That ram has a longer throw than the stock ram.  That longer ram is where the gnomes live. 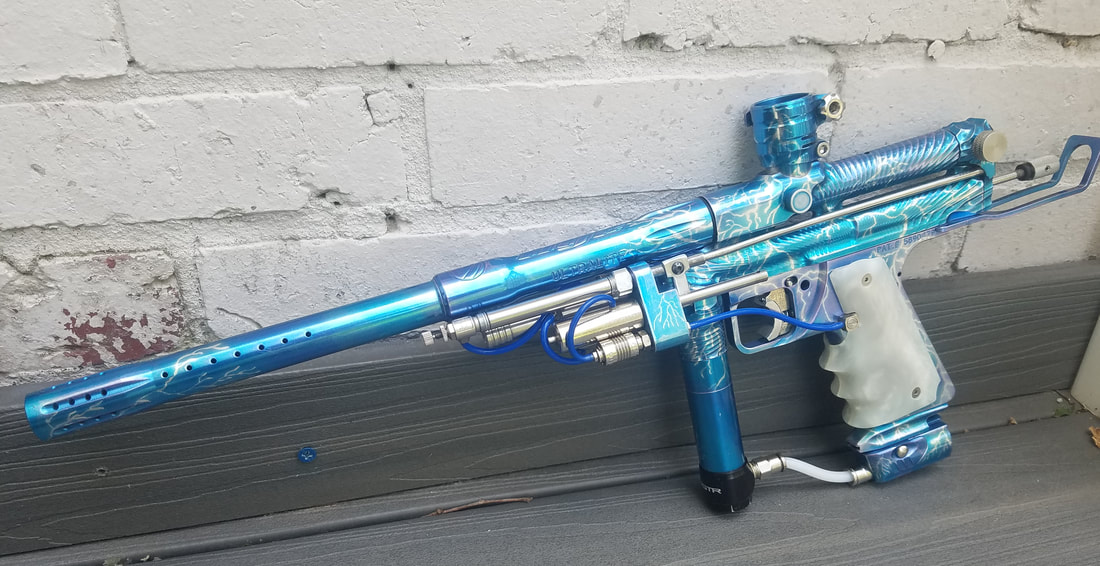 Sometimes, size does matter
The ram pumps back, but overtravels when compared to a normal length cocker ram.  That overtravel causes it to hit the back of the slotted rod, and knock it to the back of the gun.  This is where the magic happens and the gnomes get to work.  Remember that I mentioned the second 3 way and the air splitter?
That splitter is coming off the LPR and leading to that 3 way.

When at rest, that 3 way is just hanging out, holding air pressure, and doing absolutely nothing else.  But when that slotted rod is struck, it springs into action and switches the air flowfrom being held to releasing down the outlet and through it's hose.  Where to?

Through that slide check (if it's opened to allow to R/T mode to activate), the front block, the second hose, and into a ram sitting behind the trigger!  And that trigger ram does what god made it to do, and that's pound the trigger. 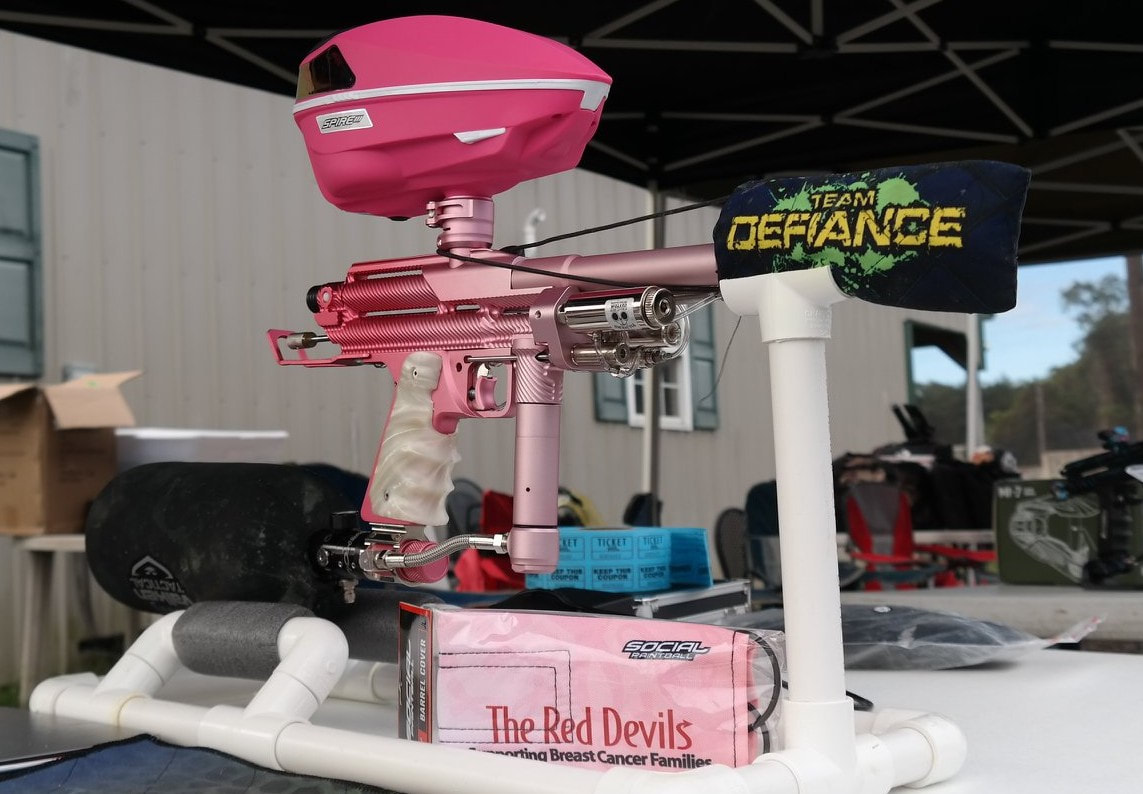 The result of the trigger getting pounded like the proverbial red-headed step-child is that it is thrown back to the reset position much faster than any springing would allow, and with more force.  Again, we go back to the slotted rod.  As the trigger travels forward, it switches your standard 3 way from air-in-front to pressure in the back of the ram.  That means your marker is closing the bolt, and your pump arm is resetting. While it does this, the tang that knocked your slotted rod backwards is now rocketing back to the reset position as well.  As it does this, that tang slaps the front of the slotted rod, and puts it back to it's initial position.  That means that the entire system has now fully cycled, and it does all of this in fractions of a second.

So why the extra parts?  The jam bolt?  The longer cocking rod?  Those are to allow the system to slow down, and to feed without chopping paint.  The system is too fast for several modern loaders when set up correctly.  Loader in the late 90's didn't stand a chance.  It also allows for an imprecise system to have some wiggle room in feeding and timing.  This may shock you, but the free floating shaft attached to the slotted rod that gets slapped around like a drunk with a Napoleon complex isn't operating with a high degree of precision.  Wiggle room keeps the system running at it's best.

So, BPS unleashed this animal at Skyball.  It was immediately banned for kicking too much ass, and the project was mothballed, with the patent being sold to Tippman for their R/T system for blowbacks.  But it wasn't all smiles and lollipops for those that had kits.  They were heavy, crazy inefficient, and bounced around like a jackhammer.  And R/T cockers stayed that way for about 20 years, or roughly until when the patent expired. 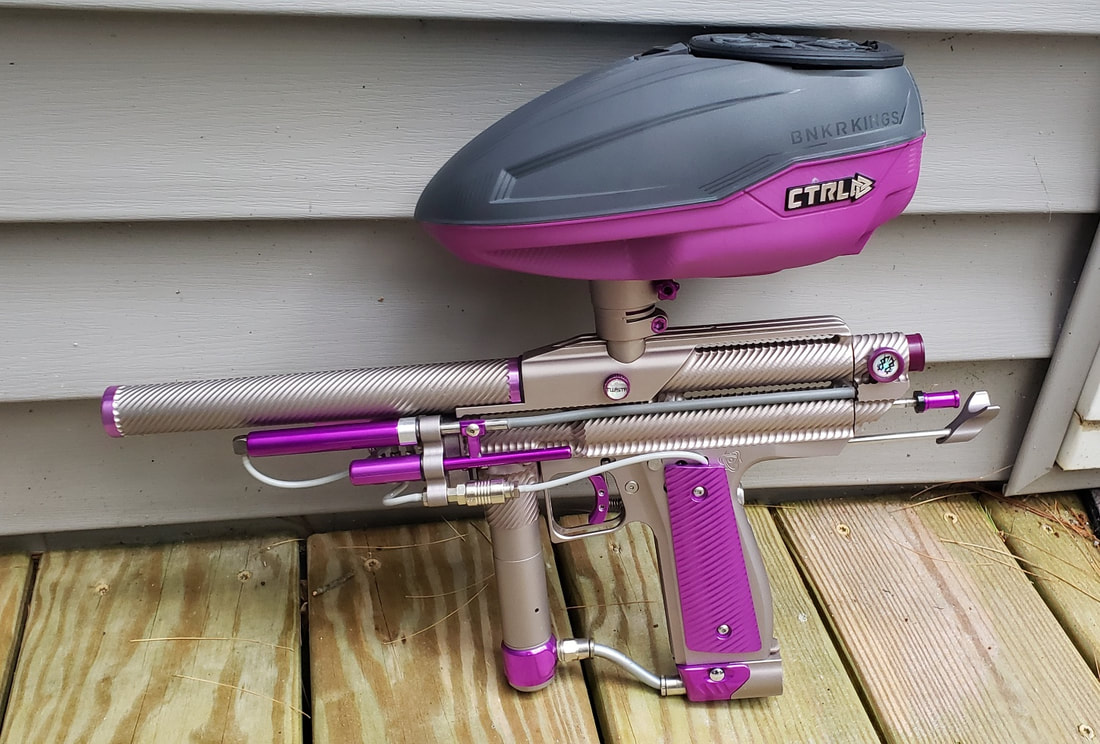 A paint-throwing monster
So what is the Annihilation kit, and how is does it differ from a good ol' BPS Reflex?  It's basically an updated version of the kit.  It uses the same principles, and works in the same general way, with a few important differences.

The most noticeable alternations are that it uses the Inception Designs frames, which have been drilled and milled to accept a ram behind the trigger and a channel has been milled to allow for the hose to run under the grips.  It keeps the air hose out of the way for shooting with the off hand, and closer to the body.  Gone is the bulky 3 way, which has been replaced with a Palmer's quickswitch that has been plugged in the front hole.  The tang and slotted rod are made of aluminum for strength and the ability to anodize them, and there is now a sleeve to allow the same for the ram.  Beyond that, the front block is severely milled down to same weight and give more space to the tang.

A more subtle change is the bolt, which is now made of delrin, has a front ramp and longer than standard, has 3 o-rings, a jam style back-end, and lightning-styled front end.  The bolt's weight reduction takes away the kick that plagued the original kits and allows the shooter to keep on-target.  The 3 o-rings stop the blowback.  The front ramp and the springing allow the bolt to be less punishing on a misfeed.  And the longer bolt (turned down to actually fit into a small freak insert inside the barrel) allows for proper timing.

WHEEEEEEEEEEEEEEEEEEEEEE
Annihilation kits come in both the 45 and 86 degree frame options, and fit on most cockers that are post-2k at the front block.  That's good.  The bad is that they are completely sold out.  I know.  I make 'em.

And Knowing is Half the Battle
Hopefully this helps explain what an R/T autococker is and how it works.  There are roughly 30 of them out there once all of the Annihilation kits are in the wild.  If you hear a mechnical machine gun going off and see a cocker ripping near you, you might be lucky enough to have be in their presence.

And just ask the owner to shoot it.  Just do it.  They're ridiculously fun.  You'll giggle your head off. 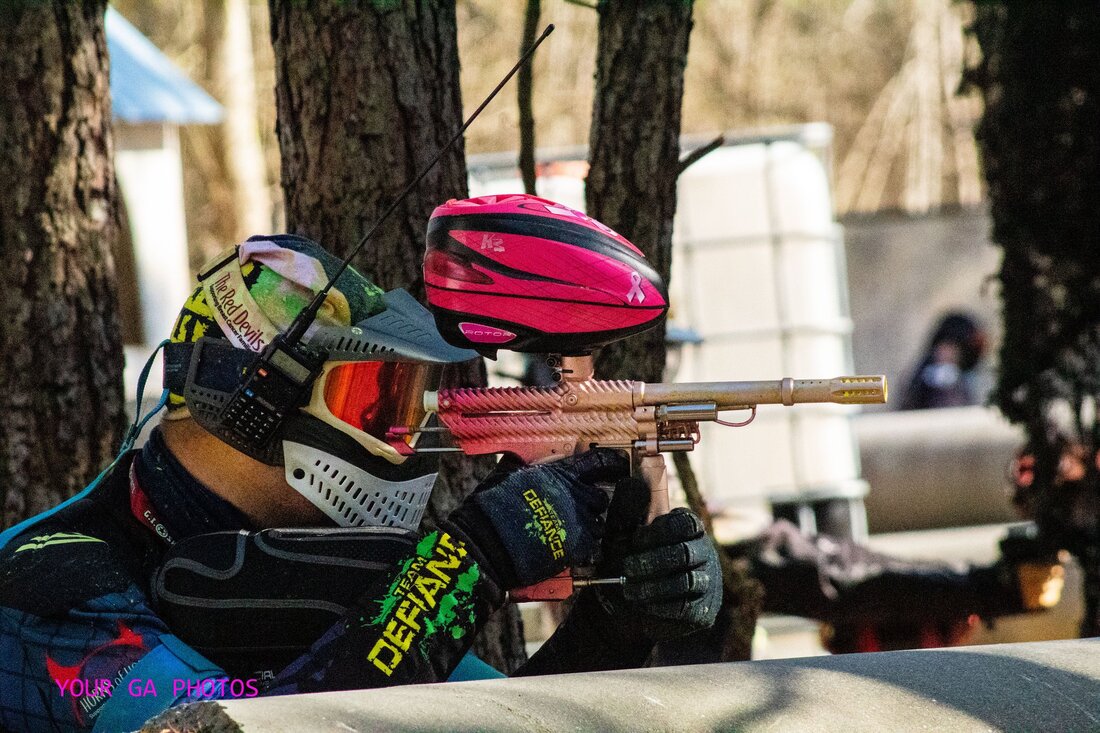