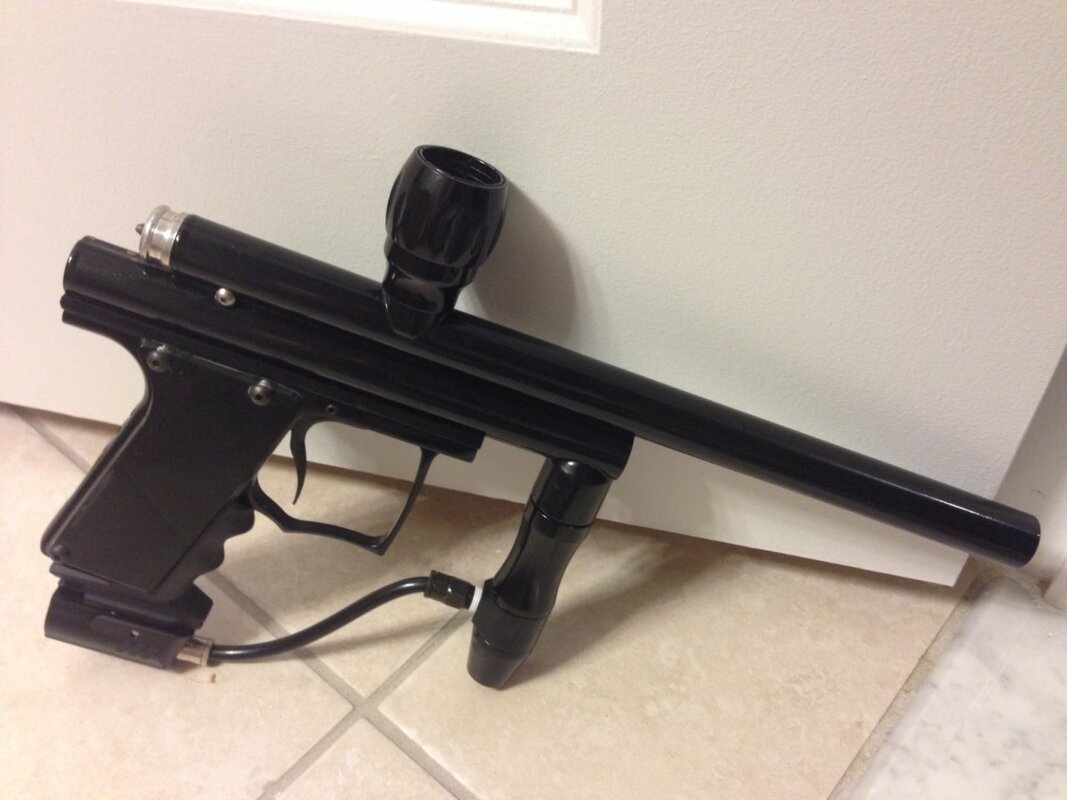 The little engine that couldn't
When people complain about the cost of an original marker or other gear, or say "This should cost $XXX.  This costs too much.  It isn't even all that complicated," I want to smack them.  Or at least have a conversation with them about the difficulty in prototyping and beta testing.  So I'm going to lay some of it out right here with a project that can best be described as a beautiful failure.  It was my attempt to build a an Aedes based off the design by Deadly Winds, with the help of multiple machinists and several other people much smarter than I, trying to get blood from a very pretty rock.

Where It All Started
The idea began around 2014, when I came across a thread on PBNation about the Deadly Winds Aedes.  It seemed like a neat concept, and I dove right on down that rabbit hole.  I found the shooting videos, and animations of how it worked, and saw what looked like a pretty simple marker.  If you don't know what one is, it's a stacked tube poppet, using an electronic valve to feed a blow forward bolt.  I had just finished building a brass bodied, fixed barrel ePGP/Brass Cocker powered by a MQ2, and figured, "Let's give it a go."  As they say, the road to hell is paved with good intentions.

Getting the Project Kicked Off
Knowing that it wasn't something that I could do on my own, I contacted my normal partner in crime when it comes to projects, Ty McNeer.  The two of us collaborated on a ton of my builds, and we both wanted to give this a try.  I also contacted a machinist on PBNation to help us build a bolt, and then grabbed a MQ2.  Ty built the body, and I picked up the eletronics and parts that we might need.

Prototype v1. There would be several more v's in the future.
The way that these are supposed to work is the HPR feeds the pressure into the body in front of the MQ2.  The MQ2 valve feeds the bolt sitting about it, with the air pressure striking the bolt above it and moving it forward.  As it pushes it forward , it pushes the ball forward, and seals the breech.  As it extends, the bolt slides off a powertube, and this allows the pressure that propelled the bolt forward and out of the front of it.  The marker fires. 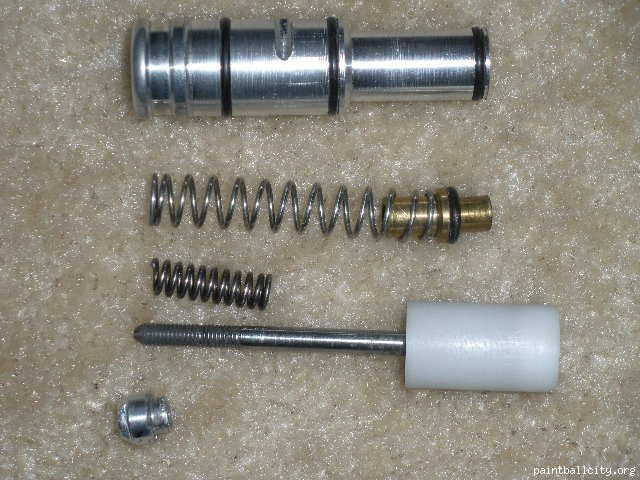 Example of one of the bolt designs
The Test Drive
We had just put together the marker, and we moved onto beta testing.  We started with firing the marker in a test environment, and within a few shots, we noticed a slight problem.  There was some pretty prominent blowback, and the return spring became warped.  We got through about 10 shots, and the bolt wouldn't reset.  Once that happened, the paint was blending like crazy.

But we knew this kind of trouble could happen, so off to fine tuning we went.  We also wanted to try a slick delrin bolt, so we made about 10.  And for good measure, we made another thinner stainless steel bolt head.  We also did some respringing, and back to the shooting range we rent. 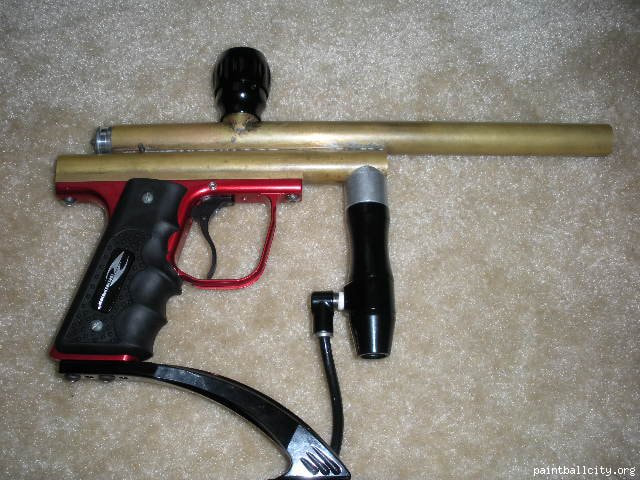 Work, you bastard
Continued Issues
This time, the range was less forgiving.  I know what you're thinking.  How could it be less forgiving?  Well, let me tell you.  The delrin bolt heads did fire---only to follow the ball down and out of the barrel almost immediately.  So we thought, okay universe, we get it.  Stainless Steel it is.  We put in the stainless bolt head.

We fired away, and within a couple seconds, the gun locked up.  What was the problem??  Well, not only had we just ripped a stainless steel bolt head in half, but we had literally torqued and torn the body.  See that body above?  I lied.  That was a v2.  The first one was destroyed.  This is actually v2.  The one that survived.

Next Up
Not willing to give up so easily, we decided to remake the bolt with some small adjustments, a new bolt head, and a new body.  Test firing still gave us some blowback, but nothing as bad as we had seen.  The springing also seemed to hold up a little better, and most importantly, the body didn't eat itself.  And while we were at it, Ty not only spoke with Mike Quinn (inventor of the MQ2), and got some questions answered by Colin at Deadly Wind, although nothing in detail. 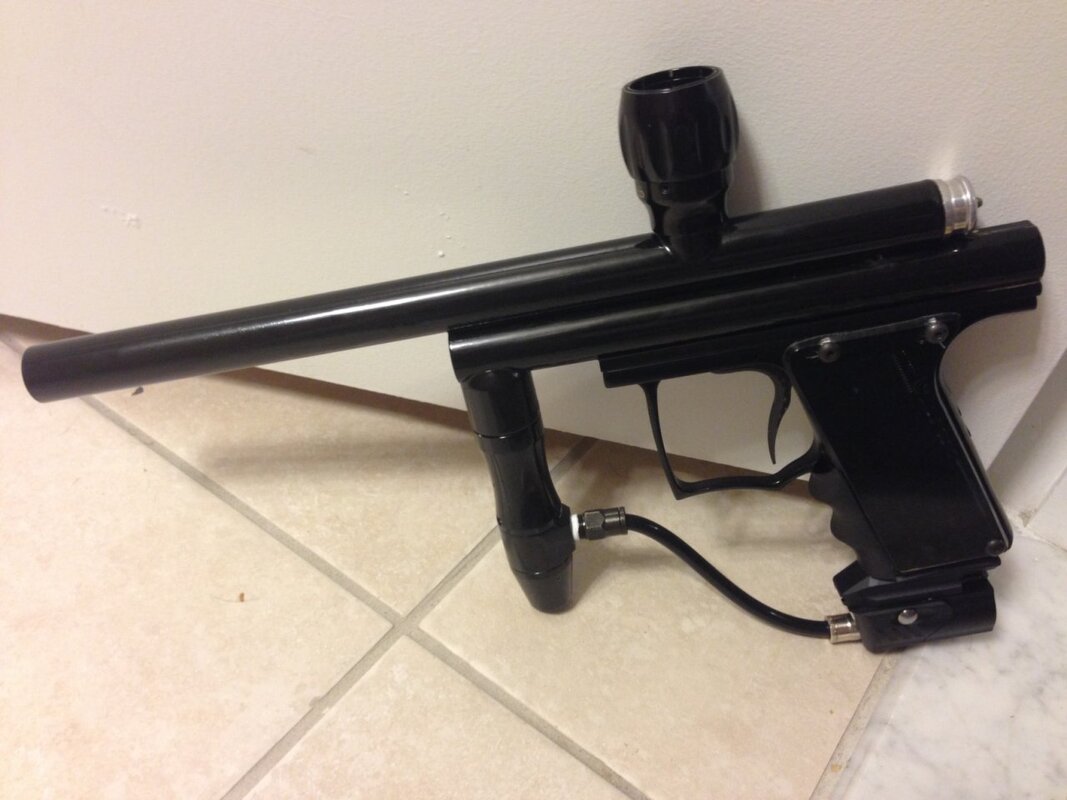 The new body, post duracoat, new frame, and board
A Ray of Hope
Emboldened by the better performance, I decided to bring it to the field for a little live action.  I played a full day with the guys from Charm City Crush, and capped the day with taking the little monster to the range.  I slapped a rotor on top, then opened up---and put 200 clean shots down range at 280 FPS, with no breaks and absolutely stacked paint!!

I was elated!  Made my entire day, and could not have been happier with it, how it shot, it's speed, and how it felt in my hands.  All I could think of one the way home was how I just found a new main marker to use for years.

When I got home, I took out the bolt and noticed a problem---the spring in the back of the bolt had survived to work for 200 shots, but was now completely mangled.  No chance it would work again.  But it had worked once---we could try it again!  And just in case, I would have a couple of secondary springs on-hand next time I used it, and we could stack them to give the bolt a secondary stage to help keep the main resetting spring alive.

Continuing the Tests
Trying out the new configuration, I took it back to the field.  This time, I was determined to run it through a day of play.  I brought it to the range, and I put a hopper through it.  It was working really well!  The cautious optimism was back, and off to the field I went!

I got through a handful of games, and with the marker shooting pretty well at the beginning, and then noticeably going downhill throughout the day.  The low point was when I was shooting out of the back corner of the field when I notice a blur fly past my head, and the gun no longer firing.  What had happened?  The bolt had vibrated loose and fired out the back of my gun, passing my face, and landing 15 feet behind me (incredibly dangerous development).  That was the end of my day, and the optimism was gone.  Also gone were the springs that were supposed to keep the bolt alive.  They had been crushed by the marker, although the secondary springing had held them out longer.  The marker still had blowback.  The marker still ate springs.  The marker now apparently attacks the shooter.  And it was blending paint. 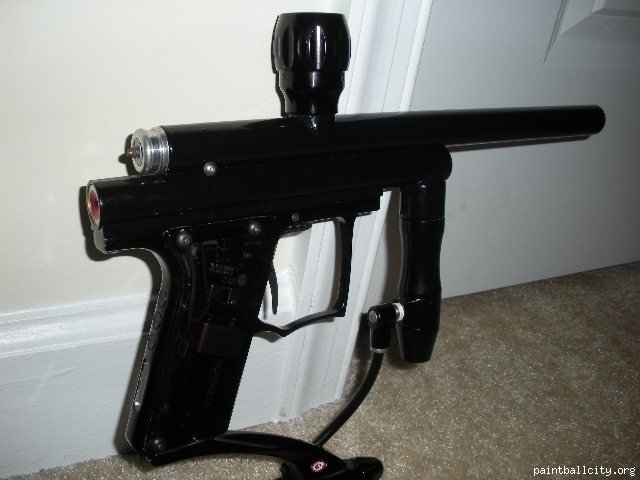 You fickle bitch
Reassessment of the Firing System
So, by now, we had identified the problems.  Spring survival.  Blowback.  And paint blending.  We focused on those three things, and what we could do.  We also looked at the firing system and cycling itself.  We came up with three things that were all real dick-punches.

The first problem was the springing.  We needed springs that allowed full cycling, meaning the bolt would still go past the breach, but still be able to survive the force of a bolt flying forward, immediately stopping, reversing course and resetting the bolt before you fired again.  It was a metric shit-ton of force being asked to fly forward, stop suddenly, dissipate, and then return the bolt immediately.  All of that was being brunt by small springs.

The second problem was the blowback.  This was getting caused by leaking air around the bolt head and power tube.  The problems here were not only that the bolt was gumming up and blowing o-rings off and apart, but that they were subject to a lot of friction and pressure at once, and we were just hoping that the lube would help allow them to survive.  That was regularly failing.

The third problem was the way that the air pressure was used to cycle the bolt.  It essentially was firing the bolt at 280fps into the paintball, No matter how you spin that, it's bad.  It's going to blend.  A lot.  And it did.

Those three problems made us look long and hard at what we could do to mitigate them, and if we even could without going right back to the drawing board.  The shooting video that we saw of the Aedes now made sense, and why we saw it once now made sense.  We could get it to shoot once.  We couldn't get it to actually survive the violence and forces in the design that it afflicted on both the paint and the gun.

A beautiful paperweight
Facing Reality
Looking at these problems, we went back and did what most people would.  We asked for help on forums, and with other people we trusted.  Every suggestion that we heard was something that we tried.  The new eyes on it weren't able to help.  And we kept coming up with the same solution---we would need to drastically change the upper dimensions of the gun, with a much larger upper tube to even have a chance.

Essentially, we would be changing the design to become an incredibly awkward stacked tube Mini or Axe.  That's essentially what the marker is---a mini is basically a bolt fed by the equivalent of the MQ poppet.  Stacking it wouldn't create any real advantages, would cost even more, and look weird as hell.  And for what?  No real advantage over something that is out now, and we know works.  At that point, we did what any rational person would to the project---we took the gun behind the shed and put it out of it's misery. 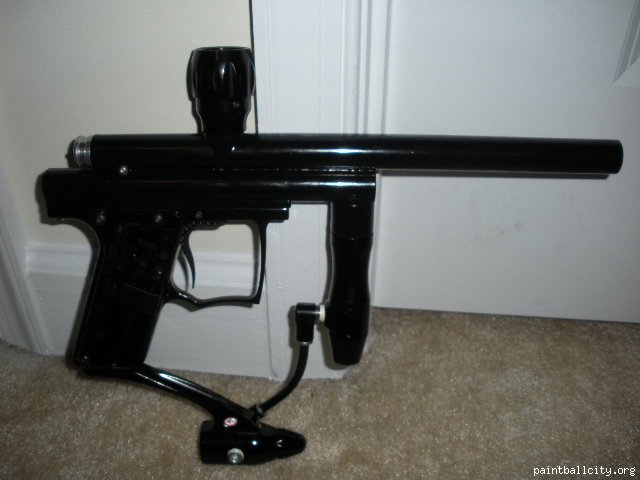 Time to die
Post-Mortem
So, the project failed.  Was there a silver lining?  Well, yes and no.  The project was a complete loss---money was spent, time was gone, efforts were shot, and we came up with a great looking blender.  So that was the bad.  But what did we learn?  What was positive?

We learned to cut losses when something isn't going to work.  We put in an honest effort, tried new ideas, and kept an open mind.  We put forward one hell of an effort, and overturned every stone we could.  And we failed.

But there's no shame in that.  The shame would have been half-assing it.  Or not even working the possibility to it's conclusion.  Innovation comes from taking the leap, even if you don't know where you'll land.  Sure, sometimes it's going to come crashing down, and you'll end up disappointed.  But sometimes you'll stick the landing, and you'll end up with something new and cool, and other people think is cool too.  And I have stories for that as well.

All of this circles back to what I was talking about at the beginning of this column.  When a company comes out with something new, before you complain about cost or wonder why it's priced where the gear is priced, remember that you're coming into the game in the fourth quarter.  You don't always know how the game went to get to that point.  Or how many games were lost before this one.

Someone worked their ass off on an idea, and that one idea panned out.  They probably also worked their asses off on several things that will never see the light of day.  You should hope that they do both again.  And if you have an idea that you want to try, go for it.  Worst thing you'll get is a sweet, sweet paperweight.