I Know Who Should Anodize Your Paintball Gun 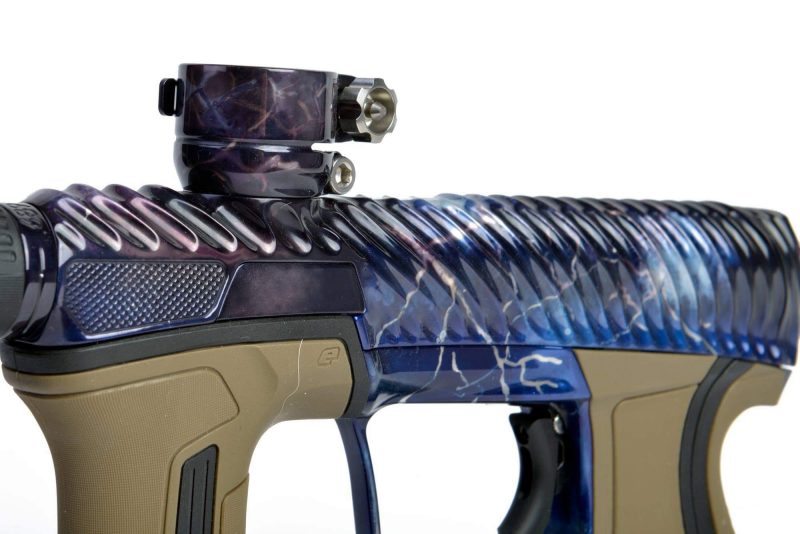 Stained Works Thunderstruck on Twister CS2
You’re asking the wrong question.  Here’s your scenario. You’ve had a great idea for building your favorite marker for a long time. You’ve collected all the parts you need. You could time the thing blindfolded with your hex-head (Allen) wrenches tied behind your back. You can picture it all assembled with and just ripping. But you aren’t sure about what you want to be done, or who can do it for you. How do you decide? Ask yourself a few questions before yelling into the void that is Facebook or Twitter.

What Do I Want to be Done?
Do you actually know what you want to be done? This is the first, and most important, question you need to ask yourself. Do you want a solid color? A two-color splash? A sponge job?  How about an acid wash? A fade or transition (and yes, there is a difference)? A reverse splash fade? 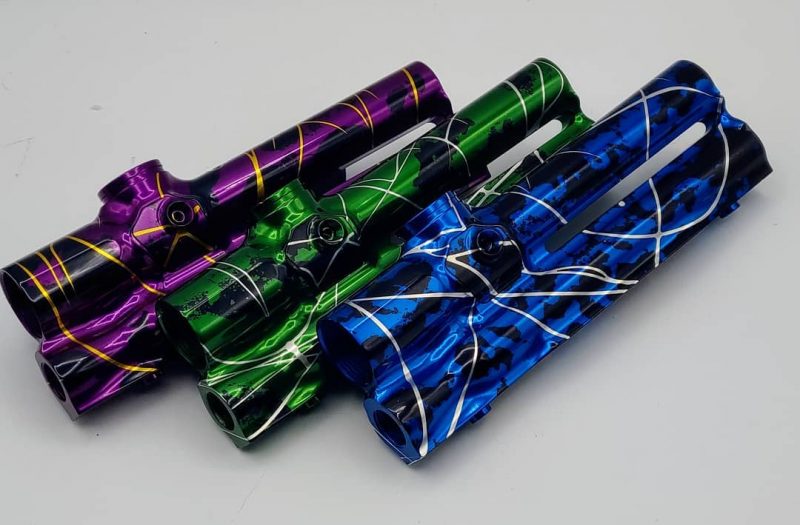 Precision Color Techniques FLE Splashes
The easiest and best way to decide this is often the most time-consuming part of the process, but you’re about to drop a couple of hundred bucks on a hard-to-reverse decision. Go to Facebook, Instagram, Twitter, or websites of the companies that you are thinking of using. Spend time going through them. Each one has strengths and weaknesses. Look at what they do well, and narrow your list. Very few anodizers are actually great at everything, and that’s okay. Figure out what you like, and see who’s great at it.
​
Also, consider what you are anodizing. Is your marker a pretty blank canvas, meaning that the milling isn’t very elaborate? If so, a busy ano can make a statement and look fantastic. Has it been cut and carved up? You might want to go with a light dust color to really show it off. The basic question here is ‘Who do you want to be the star of the show, and how does one compliment the other?’ Sometimes less can be more. Figure out your goal and plan it out now. It’s a whole lot harder to change after the fact than at this point. 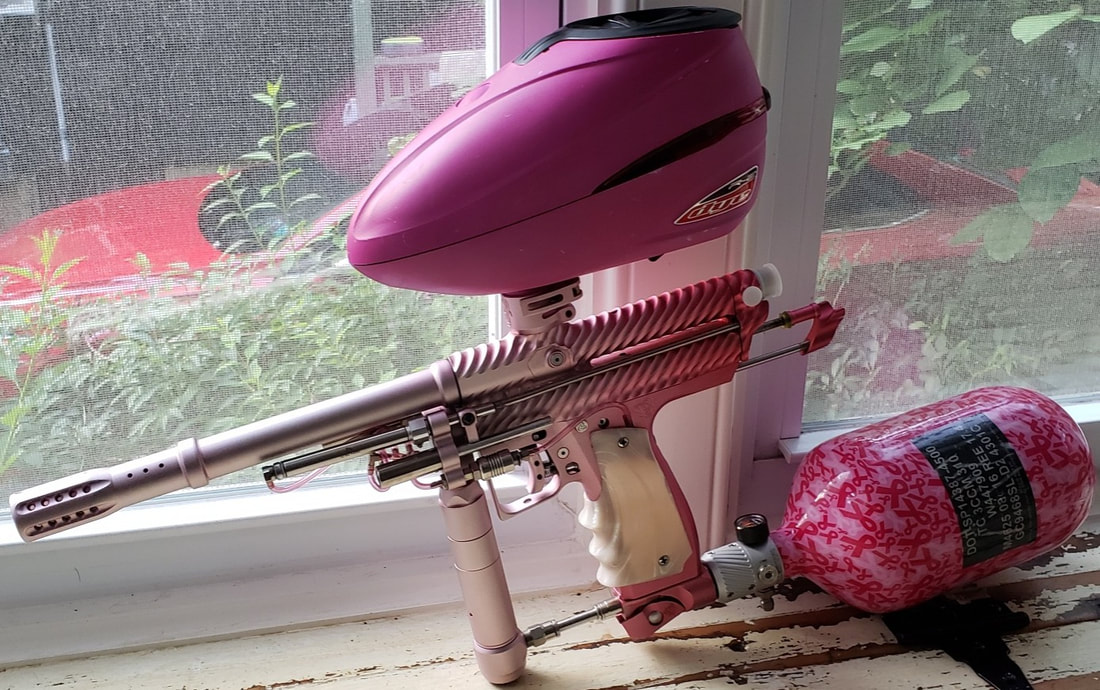 Pink Lady by Caustic Customs on a Annihilated ID Twister
Do Your Research
​So you’ve decided what you want, or have a good idea. The next step is actually researching the company. If you can, ask people that have had work done by that ano shop. This is where screaming into the void works.

I would suggest this ano group on Facebook as a resource: Paintball Anodizing Project Hub. Ask others what their experiences were like. Paintball is littered with the gravestones of machinists and anodizers whose work has fallen off a cliff, disappeared, or took on more than they could handle. Do what you can to make sure that you’re working with a reputable shop. 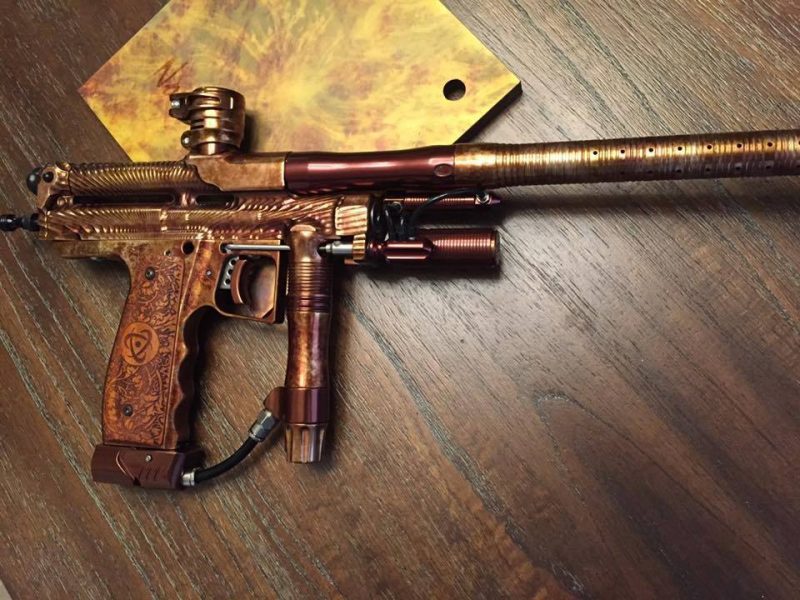 Stained Works Steampunk on F5 Twister Autococker
Ask around to who is great at a specific style of anodization, and look for examples.  One person might think someone’s splashes look great, while you might think the same job looks like hot garbage. Look around. You wouldn’t hand someone a few hundred bucks to do a job along with hundreds to thousands in parts based off a few strangers’ words in any other situation. Why the hell would you do it here? Figure out what you like, and start there.

Blue Camo by Annoworkz on FSC
One question that many people forget to ask about when checking on references is, “How did the anodizer communicate with you?” This is the single biggest source of aggravation that you’ll run into outside of shoddy work.
​
Ask someone who has gotten work done on how the ano shop got back to them if they had a question, and if they were truthful. Set expectations up front, including what the timeline should be, how often you’ll hear from each other, preferred mode of communication, when you’ll get pictures, and what the ano company can and, just as importantly, what they cannot do. You can save a lot of headaches by knowing what to expect, and what you can live with before you go in.

Quality, Fast, or Cheap.  Pick 2.
You can have fast, cheap, or good. You won’t get all three. If the shop is good and cheap, they are also busy. If you want fast, expect to pay more to cut in line or keep it simple.  Bottom line is that you aren’t going to get all of it, so decide which two you want, and start contacting for quotes. 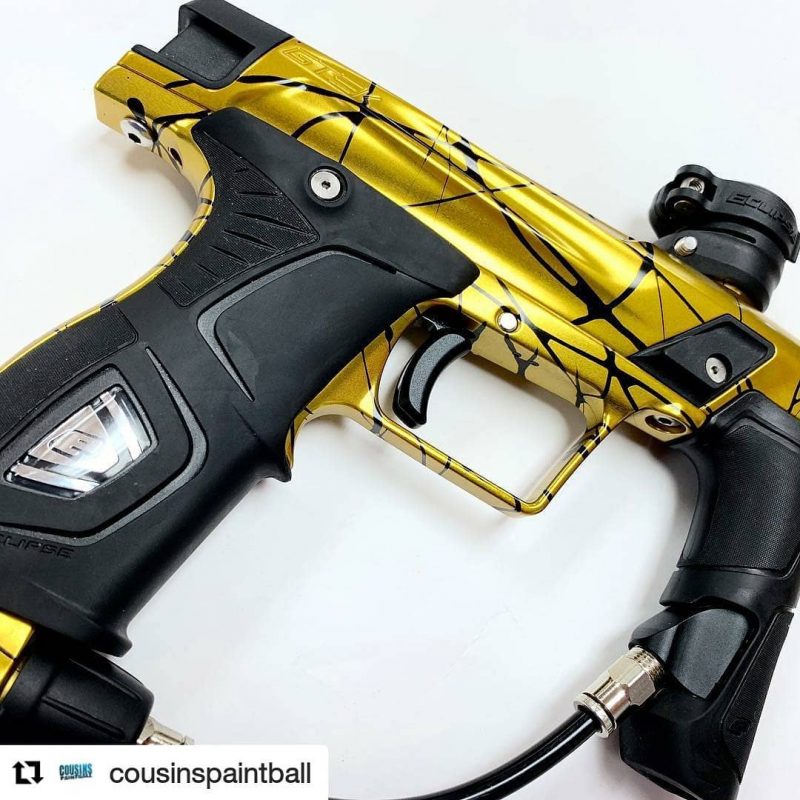 Precision Color Techniques Splash on GMEK
Ask the Right Questions
When you’re asking for an ano quote, asking the right questions can mean a lot. What are the right questions? Glad you asked. What are you looking to have done? Does anything need polished? How many parts? What is the turn around time? Have you done something like this before?
​
Can I send you an example of what I am looking to have done? How do you like to be contacted? Email, social media, text, or phone? You may want to ask several anodizers prior to committing, and that’s okay. Set expectations for both sides so that each of you know exactly what will be happening and when it will be happening. Neither of you should be getting surprised in the process. 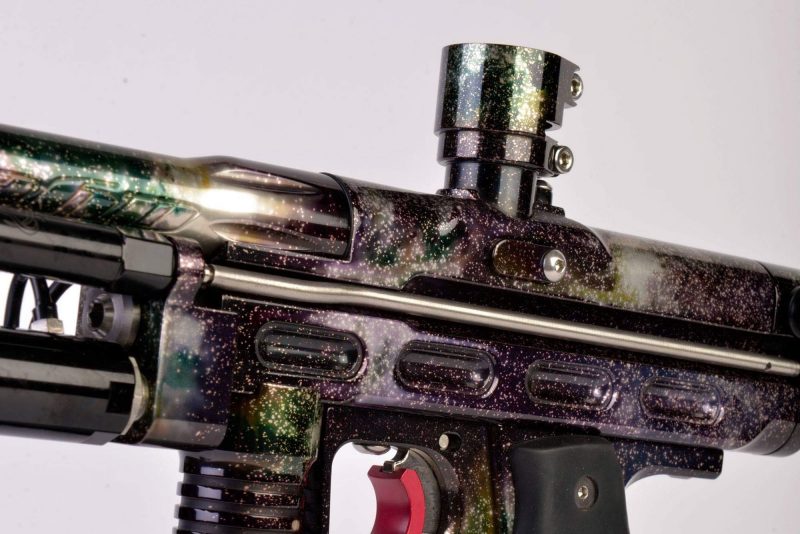 Stained Works Galaxy on Meteor Autococker
Prepping and Sanding
Take your marker apart. Let me say that again. Take your entire marker apart. That means your regulators, remove set screws, and asa. Every. Single. Part. Time is money for the anodizer. If you don’t do this, expect a surcharge. 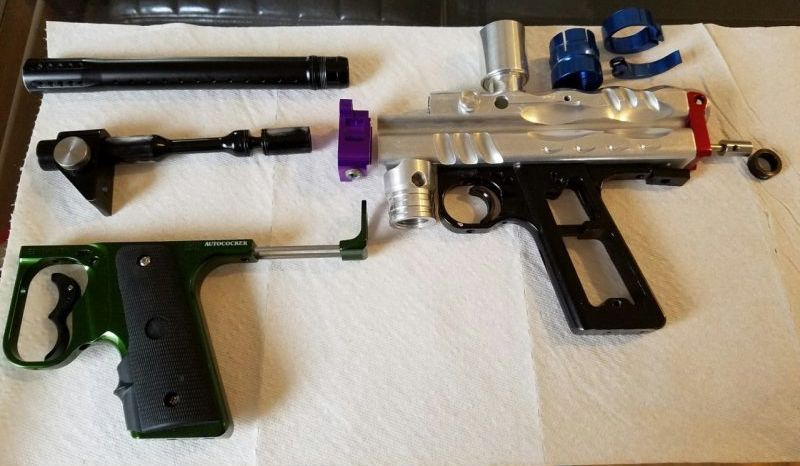 Prototype 2k+ Westwood Autococker, parts being collected
If you can get your parts in the style of finish that you eventually want, try to do that as well. By this I mean, if you want a dust finish in the end, it helps to have that part in dust at the beginning. This is especially true if you want polished. I’ve worked with several anodizers, and have yet to meet one that loves polishing. Give them a little help if you can.
​
Make a list of the parts, take pictures of everything disassembled and laid out, and send them over to the ano shop! If you can, label those parts in the picture. If parts are being done in separate colors, say like a solid color with another color for highlights, sort those parts out. Once they are sorted, pack and label those parts separately! Send that puppy out, and check with the shop to make sure that they got your baby. 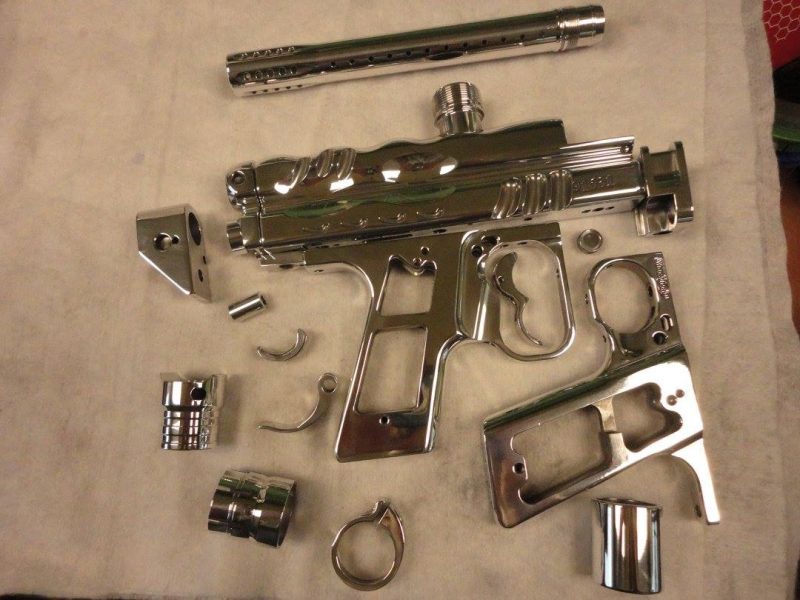 Parts polished and prepped
Communication is Key
​Wanna piss off your ano guy? Ask him how it’s coming three days after the box gets there, then ask again two days later. Keep in touch, but also keep to the timetable that you agreed upon. He or she is busy, but that doesn’t mean you can’t check in. Just be mindful of what you had spoken about, and be respectful.
​
If he came to your work and was breathing down your neck, you’d be annoyed too. And it’s not wrong to expect hearing back, just as you would give reports at your job. Bottom line is to stick to the golden rule here, and treat them how you want to be treated. Being a jerk won’t make them want to go faster for you. 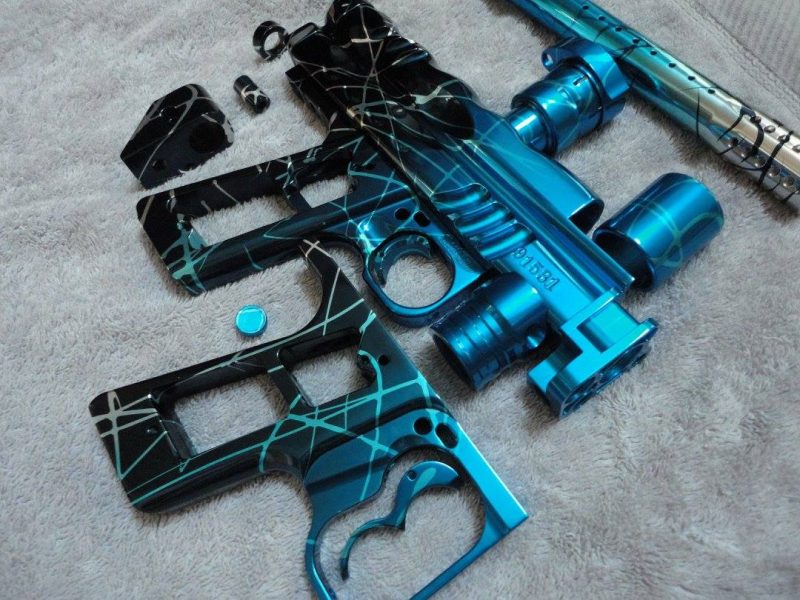 Reverse Splash Fade By Caustic Customs
During the project, you should also be getting pictures before they seal everything up to make sure that you are happy. If you are not happy with something, say something! You’re spending a good amount on the work, and they’ll want you to be happy. Be straight forward with what you want to be done. And if you’re happy, let them know as well. 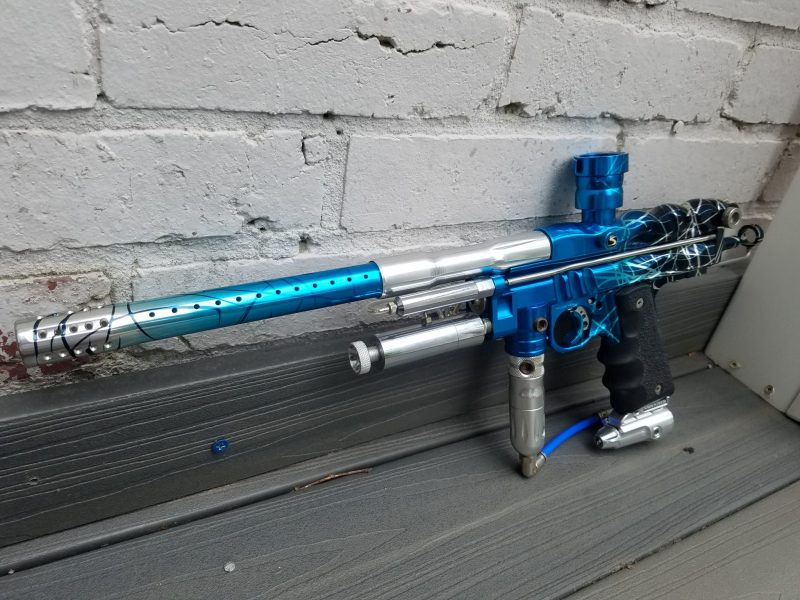 Assembled, ano by Caustic Customs
Conclusion: Who Do I Send It To?
​I told you I would be able to tell you. Here’s your answer. Only you can know it. The only thing any stranger can do is tell you the right questions to ask. Would you just buy a marker based on some stranger on the internet’s opinion? Hell no. You would want to have an educated opinion.
​
This is no different. Do a little research, as around, decide what’s an import, and then act on it. Ask the right questions, set your expectations, and pull the trigger. I know who I send my paintball guns to have anodized, but that answer changes based on my goals for the marker. The answer is to decide for yourself.