Getting to Know: A Tank Killer 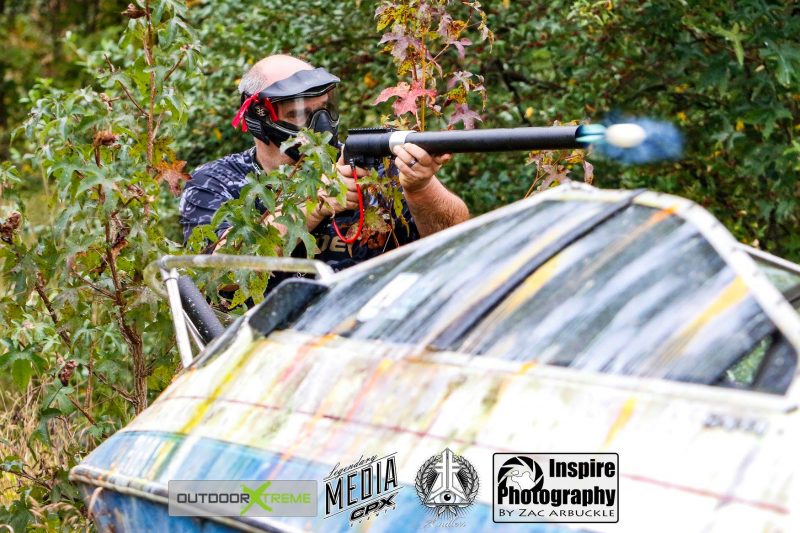 Wade Hansbury, murderin' tanks
In scenario games, tanks can be a game changer.  They can mow down units, control areas, and completely turn the tide when a side is pinned down.  If they're enclosed with armor, they generally operate with impunity.  Generally.  So what make them shake in their plating?  Wade, and guys like him.

A/T, or Anti-Tank players, operate in scenarios with rocket launchers.  These can range from homemade to professionally manufactured, like J&J launchers and Metadyne Havocs.  They shoot Nerf rockets at bunkers, buildings, and tanks, and are the only things on the field besides a tank that can take them out.  If you're hiding in or behind what they hit, you are eliminated.

While they definitely play a bit differently, they are incredibly helpful to have on your team.  They can eliminate a tank that's been sent to dominate a position, or a group of players hunkered in a building or bunker.  This can stop a push dead in it's tracks or allow your side to rush forward in ways that are otherwise impossible.  Again, incredibly useful.

I've known Wade for a long time, and honestly he's one of my favorite people that I've met through paintball.  Beyond that, he's a really strong player with a launcher in his hands.  I asked him a few questions to help you get to know him, and how a Nerf Herder sees the field. 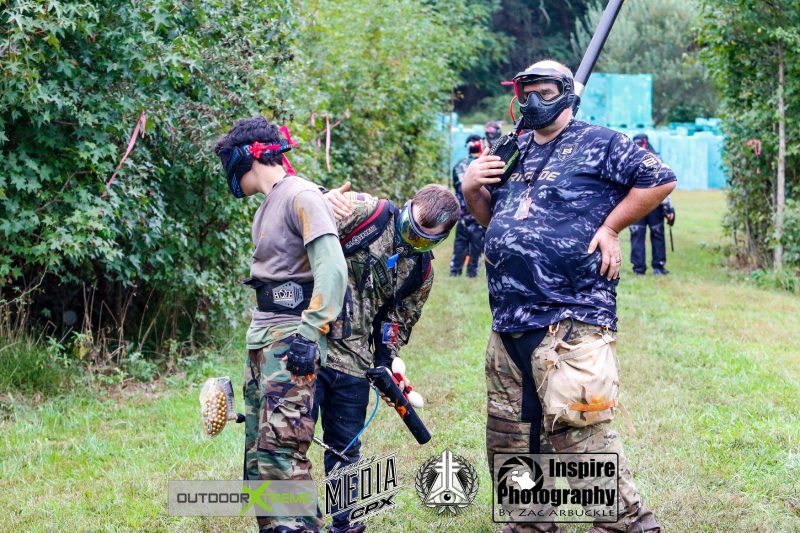 Getting ready to spoil a tank's day
How long have you been playing paintball, and how did you get into the sport?
I played my first game in the late 80's as a pickup game with some friends, just stupid kids shooting each other in the woods.  Shop goggles and tree bark chronographs.  We were luck nobody got hurt.  It was the early 90's that got me excited about the sport.  The crew I was serving with in the Navy had a group of guys who would travel to some fields in the northeast and play every chance we got.  I took a break in 95 when I sold my gear to pay for wedding invitations.  Turns out it would have been a better choice to keep playing.  13 years later I was not married any longer and playing paintball again.

How long have you played anti-tank or AT, and how long have you shot rockets? What launchers have you played with, and what are you shooting now?
I started playing the AT role about 6 years ago.  Started off with the homemade PVC and 12 gram launcher and moved to a Havoc the following year,  I have used a few different home brew models over the years and tried the JCS launchers but the Havoc has always done well for me.  I have been looking into the J&J launcher and hope to have tried it by next Spring.

What drew you to shooting rockets instead of paint? What do you like about it, and what drawbacks have you seen?
I have always liked doing something different as well as making a difference.  There are not that many launchers on the field and when you need to take out a bunker or tank to help your team advance it is nice to have one around.  One of the big drawbacks is the cost.  Rockets are around $5 each, even when you hit your target you are not guaranteed to get them back, when it sails past your target the odds of seeing it again are pretty slim. 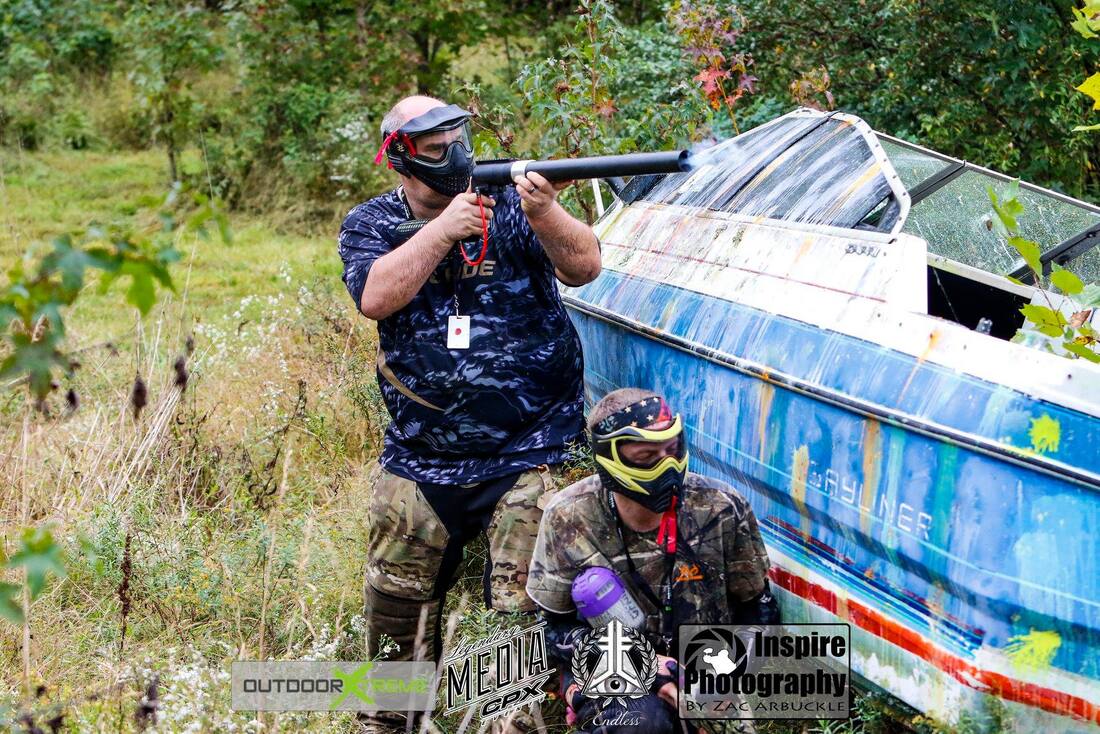 Squishy football-shaped death
For those who haven’t shot a rocket launcher before, how do they shoot in comparison to a normal marker? Do they aim differently? Are they more or less consistent? What's the biggest hurdle in hitting something when you shoot at it?
The both toss a projectile down range, but that is about the end of the similarities.  It is a much larger projectile usually travelling slower than a paintball.  If the rocket is damaged or the tail is bent, it will not even begin to fly straight.  Sometimes that works to your advantage but usually not.  The biggest hurdle I have encountered is that one small tree branch you do not even see until the rocket hits it on the way to the target.  I can hit that branch 4 out of 5 tries on a bad day.  There are also, of course, the players on the other team who do their best to keep you from blowing up their bunkers and tanks.  You need to rely on your teammates to help keep their heads down when you take the shot.

What advantages are there for a team that has strong rocket shooters on it?
A team working with a good AT player can move through the field quicker by blowing the bunkers the opponents are hiding behind.  It is a group effort though.  There is no sense in blowing up the bunkers if your team does not take them to keep advancing.

How hard is it to find places to play with rockets? What scenarios have been the best for it?
Most scenario games have some allowance for launchers, there are a few played on smaller fields where it is just not practical.  I have used them quite a bit at OXCC in Maryland at the events held there.  By far, the best event for launchers that I have been to is Fulda Gap. Lots of bunker and usually a half dozen or more tanks on each side (Editor's Note: Launchers make a MASSIVE difference at Fulda, and can make or break an attack or defense).

What kind of reaction do you get when using rockets? Are most people curious, shocked because they haven’t seen them before, glad to see them, etc?
It has really been mixed. I have had players trying to find me to help take out a bunker, I have had players curse at me because it is not real paintball.  There are quite a few players who want to see how it works and take a few shots.  I encourage them to give it a shot to see what they think.  It is certainly not for everybody, but it is fun. 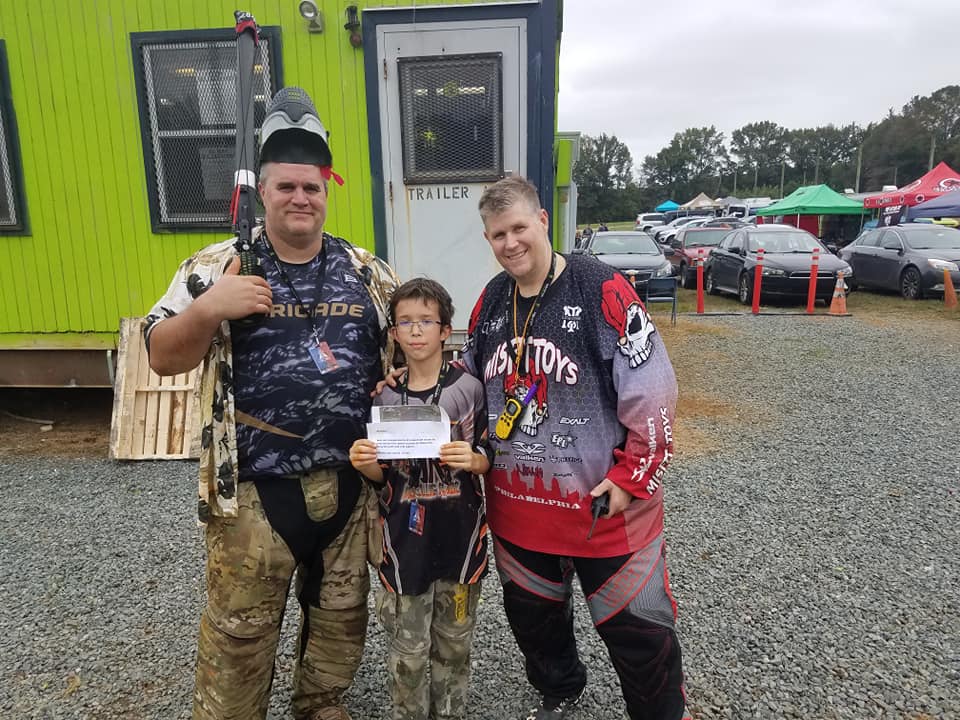 Wade with a Young Gun and Big E of Misfit Toys, another of paintball's great ambassadors
Do you see tanks as targets or threats now? Do you see them as puzzles on how to line up good shots on them?
I actively seek them out.  My favorite tanks are the ones who have loudspeaker blaring music because they are easier to find on the field.  Getting the good shot can be difficult depending on where you are playing and the rules regarding eliminations.  The teamwork aspect comes into play a lot on getting the right shot.  If you can draw their attention away you stand a better chance of getting that shot you need to take them out.

Do you have a story that can encapsulate playing AT for someone who hasn’t done it before? Anything that highlights why it’s fun to play?
A few years ago at SuperGame MD our team was pinned down on the airfield.  The other team had taken up defensive positions in the Chinooks and was mowing down anyone who tried to get past that point.  One of my teammates asked me if I could eliminate the helicopter.  One shot and close to 20 players were walking back to respawn.  From that moment on, we held them back from getting to the airfield for the rest of the day.  My teammate who asked me to take that shot still talks about it around the campfires at games we are at together. 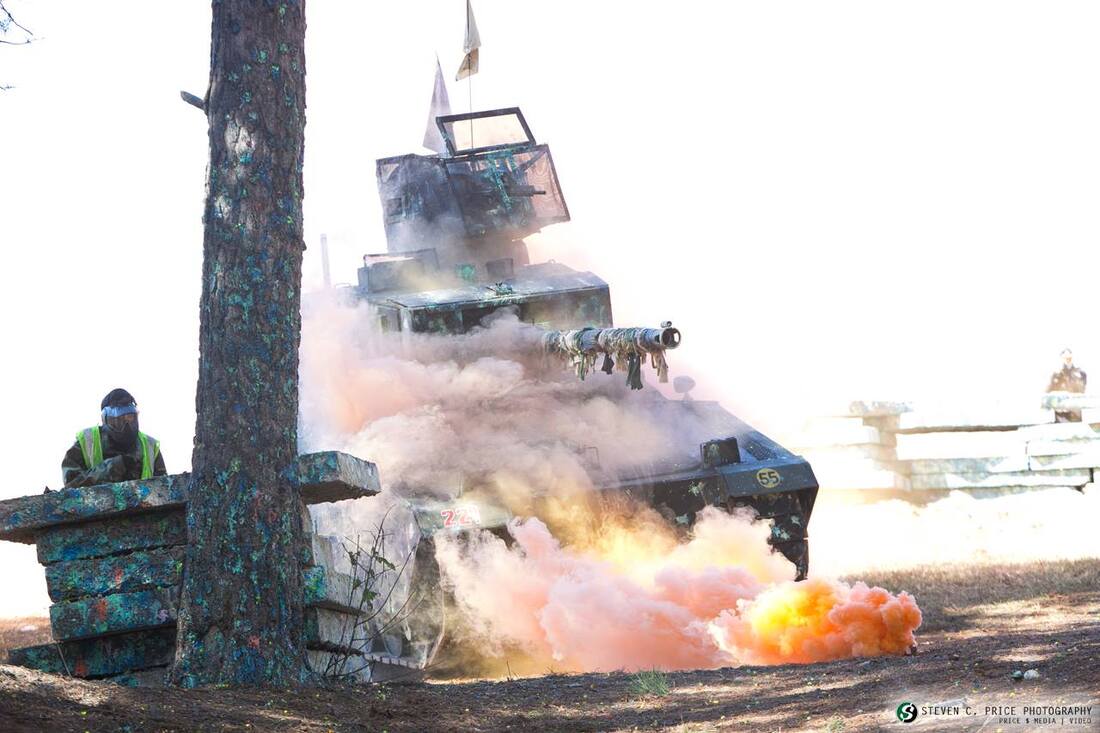 Most people run from this. A/T run towards it.
What do you see on the field that makes your eyes light up, and makes your weekend to pull off? What makes you think, “This is why I’m here.” when you see it on the field?
Two things get me excited: Seeing the enemy tanks rolling my way and large groups of players stacked up inside of buildings.  Either one tells me it is time to get to work and do my job.  Being cursed at by the players in the enemy tank as they are heading back to respawn just warms my heart.

What advice would you give newer players that see rocket launchers on the field, and want to give them a try?
Ask the player with the launcher if you can give it a try.  It may not be ideal in-game, but see if you can take a few shots at the chrono station.   Make sure you do not shoot the rockets too far away because someone needs to go pick them up.  If you find rockets, on the field either pick them up to give to the AT players or give them to a ref depending on your field rules (Editor's note: Don't be the guy that steals them.  Don't be that guy.).  Some event only allow refs to pick them up so pay attention at the safety briefing.

If you decide AT is for you, make sure you go into it expecting to lose at least ½ of the rockets you shoot at any given game.  Some events only allow for a limited number of AT players. If you decide to go that route, make sure you are ready to stay on the filed all day.  The last thing you want to do is leave your team hanging out to fry because you wanted to take a break while the enemy tank rolls around wiping out your crew.

Most importantly just like all of paintball, if you are not having fun you are doing it wrong!