HP-WT.COM
The Emek: From Beginner Gun to Mechnical Monster

Fully loaded mech beast for $500
When newbies ask what is the first gun that they should get, I never used to answer the question.  There were just too many factors.  Do they want to spend a lot when they jump in?  Do they want something that they can build up over time?  Do they want a mech, or an electro?  Are they worried about resale?

Now I answer the question, and it's always the same answer.  Get an emek.

Stock image of a stock Emek
The Emek has a lot of positives.  It's cheap at $249.  It's light weight.  And it's a truly upgradeable marker in several ways.  And I actually mean that.  They aren't just upgradeable in terms of looks or accessories.  With a little effort, you can take this from being your first marker that you have when you decide to stop renting all the way through to a very competitive mech tourney, big game, or scenario marker that will keep up with guns costing two or three times as much.  It's a hell of a set up, and the best deal in paintball.

What's Under the Hood?

Internally, the first thing to know it that it runs off a Gamma Core, the bolt system in the 170R, m170R, Etha2, and Emek.  They even use it for their flagship marker, the CS2, with some minor modifications.  This should tell you something right off the bat---Planet trusts the absolute hell out of this firing system.  They put it in most of their markers, and for good reason.

The firing system and bolt have a lot going for them.  For one, they don't need a lot of maintenance to work right.  They just need occasional lube, and it'll fire exactly as it should.  It's very gentle on paint.  And they other thing that they don't need is a brain.  It's a bolt that isn't dependent on dwell timing.  That means it's self-timing, and can be used in a mech with very few changes.

So what are those changes, since it was originally developed for an electro?  Well, not a ton, to be honest.  They took out a board, the batteries, and the solenoid, and replaced them with an mechanical three way and rod to the trigger.  So how does it work? 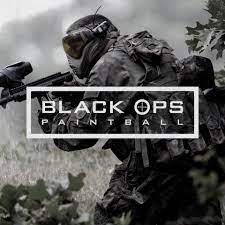 From the back
Basics of Operation

The air from your bottle goes up from the asa in the grip, into the regulator, and into the three way, which defaults in an 'off position.'  The three way, in this position, allows air to flow to the front of the bolt assembly, holding the bolt back and in place. When you pull the trigger, you flip the three way and it allows air to flow behind the bolt, pushing it forward, and then releasing the air pressure down the barrel.

Marker  goes boom, ball flies down range, enemies raise their arms, and underwear is flung from the sidelines in your general direction. Or something like that. ​

Great question.  Why do you want one, as a new player or as a player interested in a good mech?

If you couldn't tell from the tech-y section above, they're really simple markers that are extremely reliable.  The other thing is that Planet did a few things very right with them.  Competitors should have taken notice by now, as this gun is just owning the hell out of the low to mid-end mech market, putting a huge dent in the rental market, and spawned a big aftermarket base.  Why and how?

The first thing smart thing that they did was make almost any part that doesn't hold pressure out of synthetics.  Why was this smart?  Beyond the weight and cost savings, it's because of the rise of 3D printing.

Committed Paintball 3D Printed Emek body, in white for now
This has allowed for smaller design shops to go HAM in designing new parts for virtually every piece of plastic on this thing, and allowed for you as an owner to customize your marker in ways that, frankly, haven't been seen since the heyday of the Ion and, before that, the Autococker.

Want a new body?  Done.  Want a set of new detent covers?  We got you covered, homie.  Want a new back cap?  Of course you do.  How about printed grips?  Not a problem.  You can even get new foregrips from shops on Facebook, cut and added to your frame.  And with 3D printing technology advancements, the parts have become more and more durable and better looking.

The other fun part about 3D printed material is that you can get them in a variety of colors without relying on ano shops.  You don't have to send your parts out, wait for months to get them back, and pay anywhere near the same cost.  See that set up above?  I got that entire group of parts for S165 on sale.  That's the entire upper tube and POPS ASA slide.  And if you want to try something different and even more custom, you can dye 3D printed parts yourself to do something like this. 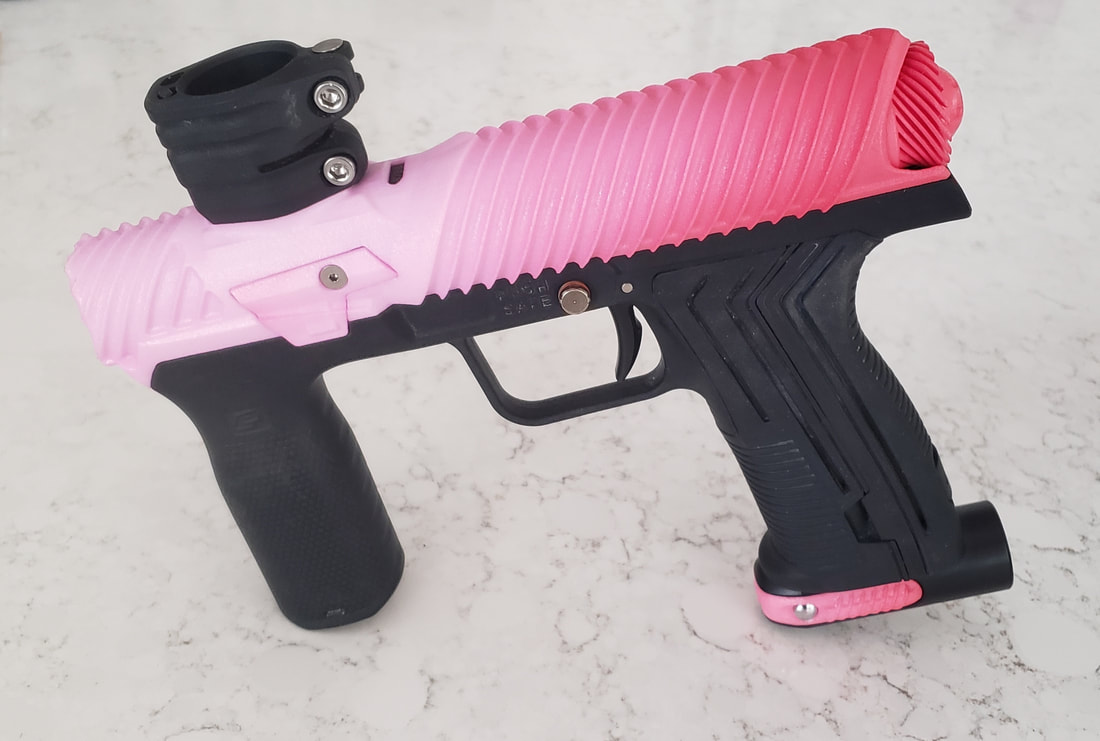 Pink Lady Fade, done by me for the cost of a pot and $10 in dye
The second thing that they did with this marker that was incredibly smart was to keep the costs down by not necessarily going for broke right off the bat.  By that I mean there are several areas that you can improve for performance, but you don't need right away if it's not in your budget.

There are four main things that almost everyone will point to immediately.  The first is the on/off, or lack thereof.  It comes stock with a standard ASA.  That means nothing to turn your air on or off when you screw on the tank.  While it's considered a basic stock part for any high-end marker, do you need it?  Not really.  Would I recommend it as an upgrade?  Hell yes.  But if you don't play a lot, are getting this as a loaner, or can't afford it, you can play all day without one and will likely barely notice.

The second area most people will point to is the stock trigger.  It's very heavily sprung, and have no stop screws.  This means that there is a hell of a lot of extra travel prior to and post shot.  There's actually not a ton of side-to-side slop, which is nice.  Just a lot of excess travel, and a harder pull.  Thankfully, these are all easy fixes.

If you're on a budget, swap out that trigger spring with a lighter one (kill a pen, steal it's spring).  And if you trust yourself with a drill press and tap, you can drill out the trigger to take set screws.  If you don't trust yourself and want a trigger shaped slightly differently, Inception Designs makes an excellent replacement, and Infamous also makes one that is highly stylized.  But again, this is just tuning, and you don't need it to play.  You can do this later on, and drastically lighten and shorten your trigger pull.  Still no shame in using a stock trigger on it.

Full set up with the Inception trigger with set screws
The third area of improvement is the barrel.  It's a crappy stock barrel.  Single bore, and it's on the big side, with very little porting.  Get a kit, or something that takes inserts, and you'll actually hit what you aim at and not tell half the field where you are.  Again, you don't need it, but it will make your marker noticeably nicer to shoot.

The last area to improve the marker is the three way in the frame.  There are two ways to go here.  You can get a Bang Switch, which will shorten your trigger pull in the threeway itself.  This is a cheaper performance option, and a good one.  It does what it says it will do.

The second option is the hAir Trigger threeway valve by Deadlywind .  It also does exactly what it says it will do in shortening and drastically lightening your trigger pull.  The best comparison I have from shooting markers is that it makes your trigger feel like a pneumag (so like 20 of you are probably nodding your head).  It gives it a very, very light, short trigger pull.  It also will set you back $90.  Do you need it?  No.  But if you want to shoot fast as hell, it sure makes it a lot easier.

How they start life
Running the Gamut
Emeks start life as a cheap, reliable marker.  They're currently $250 new, putting them squarely into the 'new player,' rental, and loaner market.  But they have an engine in common with mid-to-high ends, and you can honestly leave it alone with no shame, having a solid performer that will let you or your friends have a good day of play without the frustrations found in most low-end markers that have shoddy construction, break paint, weigh a ton, and are really long.

At the same time, you can really take the marker and run with it if you want to make it a mechanical monster.  Toss on a new trigger and the hair trigger valve, and for under $400, you now have a mech that can absolutely fly and keep up with anything on most fields if your little fingers can.  Add an On/Off ASA and barrel kit, and you now have a full set up for $500 new that can compete with anything that doesn't ramp, is light, can stack paint, and has the conveniences of a higher-end marker.

That Pink Lady Twister in the first picture of the column?  I spent $500 total on that and it's fully loaded.  I did get the body on sale, and bought it as pro-owned used (It may sound great to new players, but if you actually know what pro-owned usually is, that means as worn out as a middle-aged prostitute).  By the time I finished the build, I have a marker with a crazy short and light trigger pull, that looks beautiful, is fast and reliable, and I can hand off to any buddies that need to borrow a marker or shoot myself.

If you're a new player, it's the best option you have for a first marker.  If you're experienced, you have either a good back up or something to hand to a buddy that doesn't play very often when you get them to a field.  Either way, good times will be had without breaking the bank.