Evolution of a Barrel: The Inception DEsigns PWR Barrel Kits 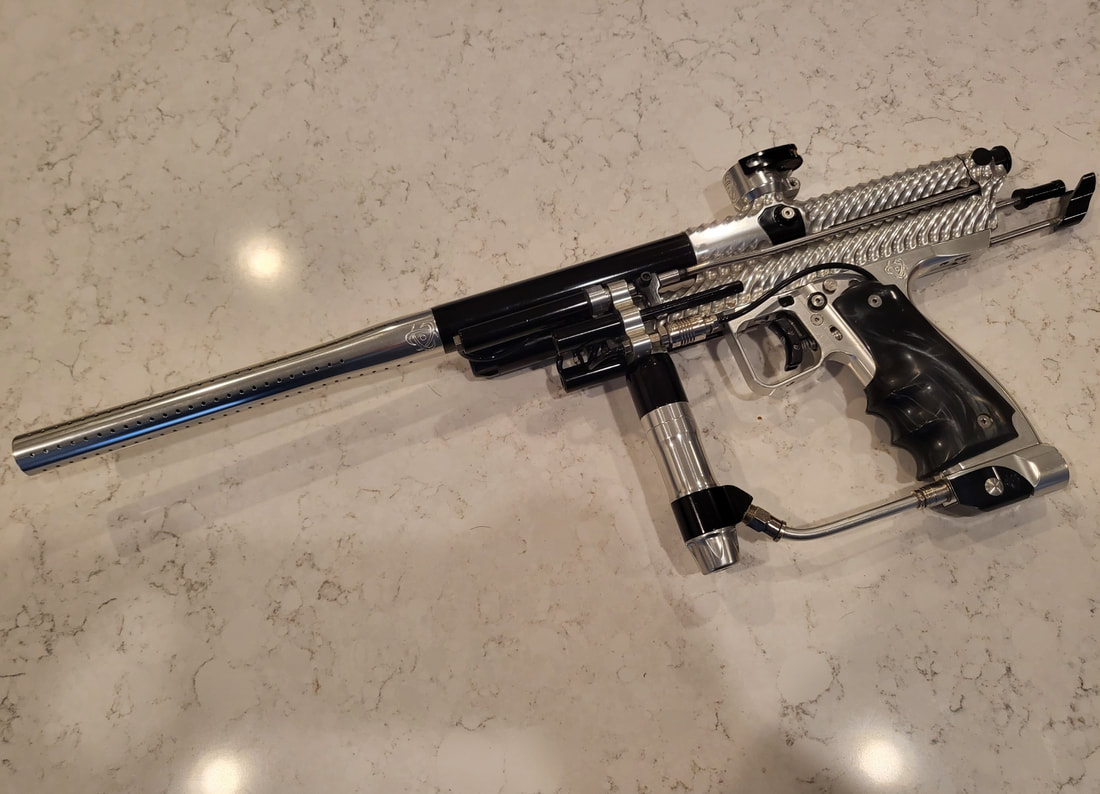 This is what I would call a damn good set up, with PWR barrel system installed
Insert barrels are not a new thing in paintball.  Smart Parts put out the freak over 20 years ago, and the insert system caught on like wildfire.  They also are an area that, frankly, there generally aren't a lot of earth shattering changes in.

Now with barrels, there are some giant leaps forward like the advent of the insert, the barrels that can spin a first strike, and, of course, slapping a bird cage on the end of it, aka the Ramrod.  Then there are smaller tweaks to make the barrels more consistent or just flat out better, and these barrel kits fit more into that category.  Inception Design's PWR barrel systems are really the next evolution of inserts. 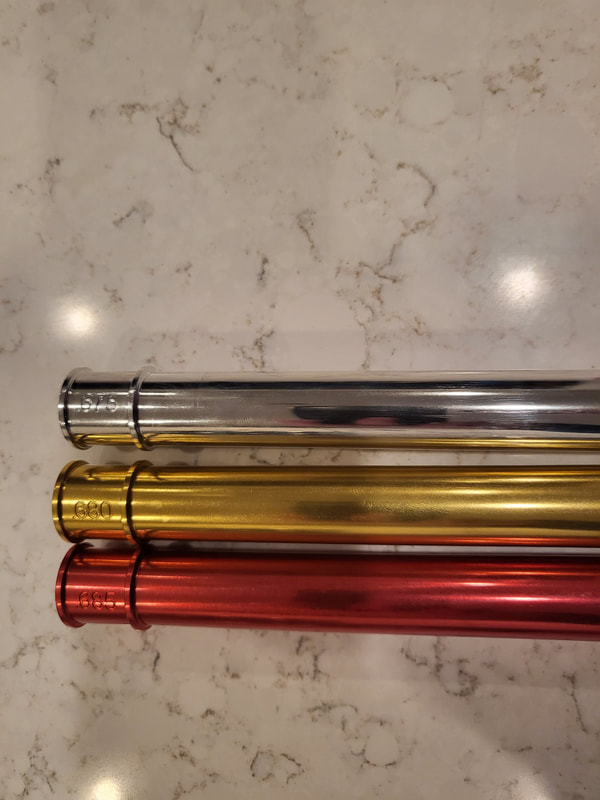 Inception Inserts in all of their glory
Insert systems have been around forever, and are effective.  Pick up a barrel back, a tip, and then a few inserts that you drop into the back.  These inserts are different bore sizes for you to use and pair with your paint, with most people doing it to under or overbore (don't use blow-through sizing---literally the least effective way to size).  Once you have your insert picked out for the day, screw it all together and have fun.  Plenty of companies make these barrels, and for good reason.  It's cheaper for everyone to sell inserts than full-on barrel backs.  They're effective.  And you can actually bore out old barrels to accept inserts, giving old barrels a new life. 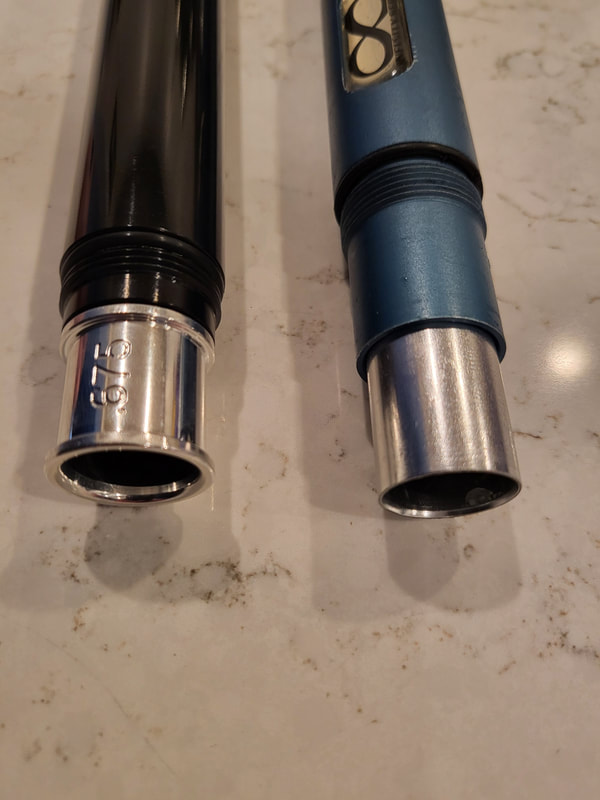 Spot the differences
That's not to say all inserts are created equal.  I have a LOT of freak-bored older barrels on my markers, and they do result in breaks, although not likely in the way that you might think.  I underbore all the time---I shoot a closed bolt marker, and that makes underboring a must.  And people get the misconception that you get barrel breaks because of underboring too much.  That's almost never the case---much more likely to get hooks from drag than an actual break, and you have to be WAY under to get that.

Most breaks come from one of two things.  They come from either your bolt clipping the ball above your breech in the ball stack, causing a crack, and then feeding that ball into the breech and firing said broken ball, or from your paint catching an edge on the insert itself, cracking the paint, and then blowing the mess all over yourself.

GOG or Smart Parts inserts have two inherent flaws.  The first is that they often should have come with the rating -ish behind their lasered size on the insert.  Sometimes they're that size, but a lot of times they just aren't.  Grab a pair of calipers and go ahead and check them out sometime.  It can be both hilarious and depressing.  The other issue is that the beveling or ramps going into the inserts often have sharp ledges on them.  You should be able to see where I am going with this.

Again, breaks are often caused be the lip of the insert catching your paint and cracking it open as the ball passes from your breech and into your barrel.  Inserts contribute to this because of the edges on them in many systems.  Everyone got that?  We good here?  Okay. 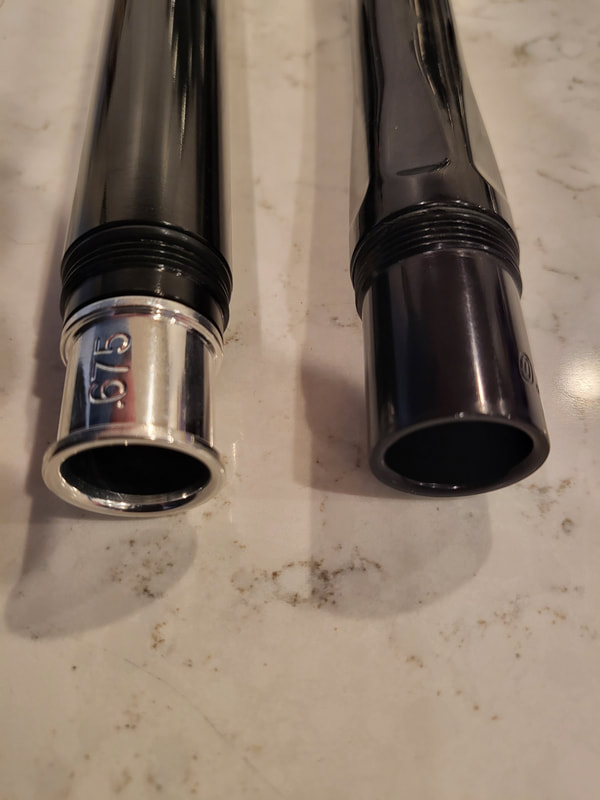 Notice the similiarities
This is where the PWR insert comes in and shines.  The PWR inserts come from Inception Designs, and Planet Eclipse.  That right there should tell you a lot in terms of the thought that went into them, since those two companies employ Simon Stevens and Jack Wood, literally the two best engineers in the industry and engineers that actually get out and play.  And the PWR barrel systems seem to have taken the best in both company's barrel systems and improved on the current insert systems in existence.

The inserts themselves seem to have borrowed pretty heavily from Simon's previous barrel system, the Stella.  Those barrels shoot incredibly well, in no small part because of the entry way that your paint takes in going into the barrel.  If you ever looked into the breech end of a Stella barrel, you'd have noticed that there's a really heavy, rounded bevel turned into the end of the barrel.  It's noticeably different than most barrels of the market in that there's not an edge there---it's quite literally rounded.  That means that you're not going to have paint catch the lip of your barrel and break.  There's nothing to catch.  You'll also notice that Stellas have one of the longest barrel backs available in two piece barrels, with an 8" control bore.  That's literally long enough to get your paint to velocity and shoot sans tip, with the tip itself really focused on quieting the shot itself.

Care to guess what these inserts are like?  They're basically the inside of a Stella in insert form, only lighter, with more options, and cheaper.  They have even more length at 8 1/2 inches of control bore and the rounded entry way to allow you to keep the actual barrel breaks down.  They come in an absolute ton of sizes, between Inception and Planet Eclipse, with options of a new insert every .002 going up starting at .675.  If you have a custom ano'ed marker, that means one barrel will now cover just about every size you'll ever need.  And Planet and Inception both actually will make the insert the size that is actually cut into the outside of it, since, you know, pride in what they do.

The barrels themselves have multiple options as well.  If you like the look of PE's barrels, they have full barrel kits that accept them designed for their high end (or any, really) markers.  Inception carries a Stella back for their high-end kits, with milled down design close to the standard Stella backs.  They also carry Genesis backs, which are basically bull barrel style backs.  And Inception carries several tips, ranging from stubby little short tips if you like smaller barrels, longer ported barrel tips, or carbon fiber if that's your thing.  You have options.  And I know that there are small custom boring shops that are looking at boring out older barrels to accept them as well. 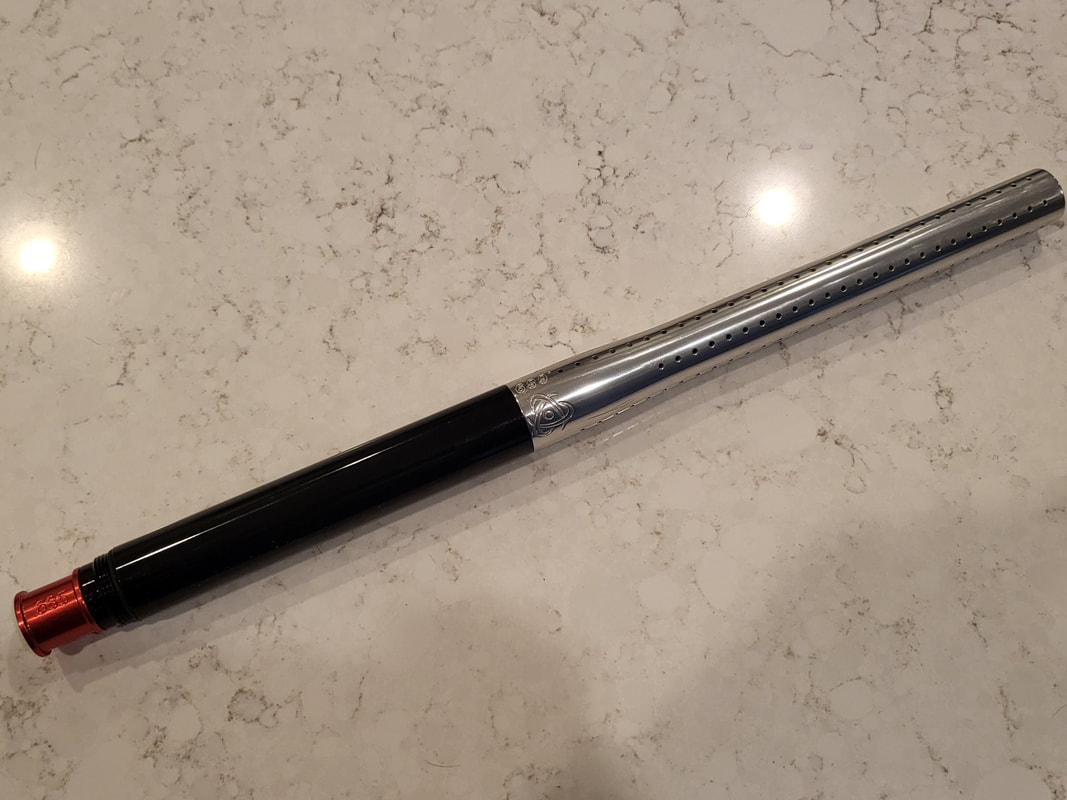 Gloss black Genesis back with a Stella Straight Port tip
So how do they shoot?  Pretty damn well, or at least as well as whatever paint that you're feeding into it will let you shoot.  I can tell you I haven't had many breaks at all in mine while shooting it, and my guns will absolutely punish paint when anything is off in the firing system.  I can also say that I wasn't thinking about my shots while shooting with this insert system on my marker.  I didn't need to because the paint was going where it was supposed to, and wasn't breaking in the barrel.  And that's what you want out of your marker and barrel.

Inception Designs PWR kits are great if you're looking for a barrel system with an absolute ton of options.  Want a PE barrel?  You're good.  Want a carbon fiber tipped barrel?  Still good.  Want a shorty barrel?  Got you covered.  How about a 14" quite aluminum barrel?  Yup.  Need to change bore sizes regularly, depending on the event and weekend?  Literally what they're made for.  If you're in the market for a new barrel, these should be one for you to consider.