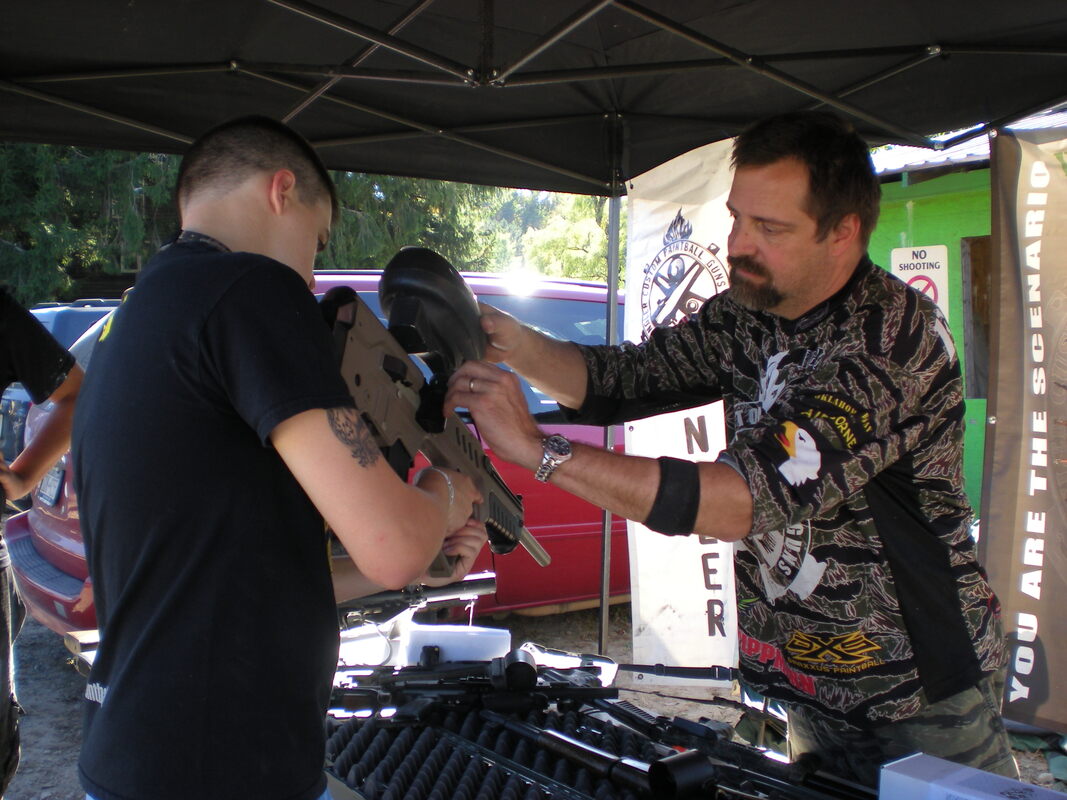 Eric Engler, right, working through a marker with a player
As anyone who attended the final D-Day can tell you, the people behind the scenes at a major paintball event really matter.  They take care of things like getting the field ready, playable, safe, organizing the command, advertising for the event, and actually running the thing.  All of that work is what lets us go out over the course of event and just play---and not have to worry about things like killing yourself on the field and making sure that there are plenty of targets to shoot at running across from you.

Enter Eric Engler.  He's the guy running the show at CDWC, otherwise known as Command Decisions Wargames Center.  While the field is, in fact, awesome year-round, it's also home to Fulda Gap.  He also has taken the reigns for it, and so far, so good.  He's been working to make it the best event possible, and I wanted to touch base with him to ask a few questions about his background and the event itself.  With that, I give you the promoter of my favorite event in paintball.

A little 70+ acre field known as CDWC
When did you start playing paintball?  Where?  What teams did you play on?
My first game was in the woods in Wisconsin in 1984 with Nelspots and oil based paint.

Over the years, I have been asked to play on many teams. I have always had my own team, but have had the honor of leading the OKLAHOMA D-day 101st Airborne for 12 years, and been an honorary member of the following teams: Blues Crew, CEF, Delta Paintball.

How did you get into playing scenarios?
I went to a big game at hosted by the cadets at the West Point military Academy, in 2002. They had one based on World War II and then one based on Korea, and I was hooked.

How big were the ones that you started with?
The games on the West Point campus or between 300 to 400 players in the beginning.

When did you first get into large scale scenarios like Fulda Gap and Oklahoma D-Day?
I went to Oklahoma D-day in 2004. I wanted to play and possibly lead a 15 man unit.  By game day, I was leading the 101st airborne division of 250 players. 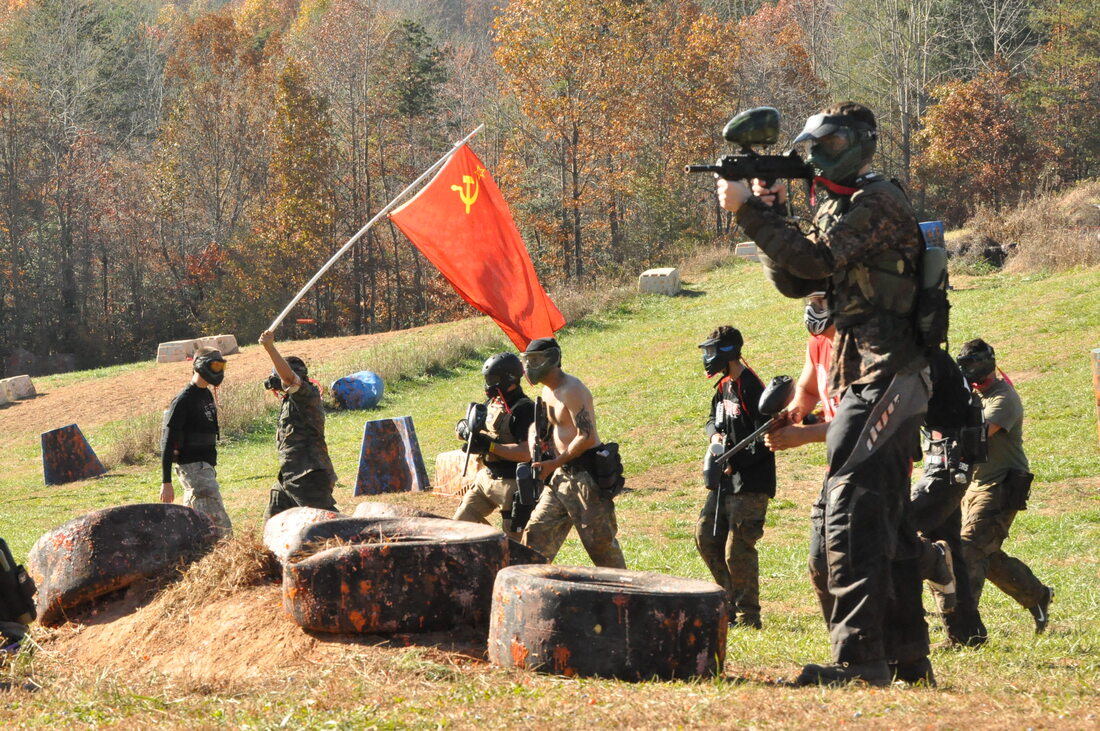 Fulda Gap Scenario, seen here filled with commies
What was your progression as a player at Fulda Gap?
There really wasn’t much progression. I was a vendor there for several years and watch the game, having met Andrew Ferguson the producer of that event, at Oklahoma D-day

When did you move from being a player to an officer?  How did you make that transition?  And from there to Generaling the event?
The funny thing is I never really stepped on the field of Fulda Gap as a player before General it. One year, while a vendor, I walked on the field as far as fire base bravo to see what was going on and that was it.  In 2014, I received a call from Andrew Ferguson with a last minute request to lead NATO, as his commander could not make the game.

What kept you coming back to the event?  What was your favorite thing about it as a player?  An officer?  The General running an entire side?
The Production staff, the players, and the people I’ve always kept me coming back to Fulda Gap. My favorite part about being an officer is the quality of unit commanders and people willing to step up throughout the year to get the NATO side ready for the event. The dedication of a player that comes to this game also kept me coming back over and over. 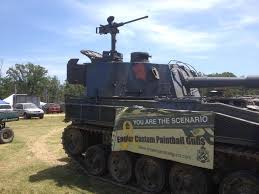 A tank with Engler's Customs Banner!
What are your favorite moments or stories from playing in the event?
There are so many favorite moments. From Richard (Momba) Money taking team Capital Offense and capturing Fire Base Bravo after I asked him not to because it was the only base left to Warsaw at that time in the game. When he called me on the radio and I asked him where he was, and he told me what he did, I told him to give it back (and he did)...but it was funny.

The other funny story that comes to mind would be From 2015 where we had been using scanners to listen to the Warsaw radios all weekend long. At the end of the weekend, as the game ended, I programmed one of my radios to call the Warsaw Commander and thank him for a great game...on his own command frequency.

How did you come into your role now, running the event itself?  Why did you decide to take this on?  How do you feel about being on this side of the game, instead of operating as a player?
After the 2019 game, I was asked if I was willing to be the producer of the 2020 event by Andrew Ferguson, Pete Russell was running the field, but I would run the game. I had agreed to that and was looking forward to that. Unfortunately, the Covid lockdown prevented the 2020 game from happening in its original format. Pete Russell and his staff put on a great game as a substitute and it allowed me to be just a player in 2020 driving my daughter's tank.

Do you still plan on acting as a vendor at the event?  That's a whole lot to take on in one weekend!
It is not widely known, but in December 2020 Pete Russell moved to South Carolina to take over Palmetto Paintball. Starting at that time, I took over running Command Decisions. So technically, I will not be a vendor at the game, and I have put off any custom-made guns until December of this year. Fulda  takes priority.

What are the biggest challenges about running Fulda Gap?  Who is helping you out?
The biggest challenges so far have been implementing a brand new ticketing system (Editor's Note: Thank goodness!) , and getting the field prepared for the event. We are currently in the middle of making major changes to the field, and some rule changes as well so that the game is different for even the most seasoned Fulda player.

On the office and production side of the event, I have both Andrew and Lee Ann Ferguson helping me out. Having run the game for so many years I would be crazy not to involve them in the game.

As for field preparation and everything else, the field manager (Matt Camire) does an excellent job of maintaining the field, but without the help our our home teams and Richard (Momba) Money. The many dates and changes to the field wouldn’t be happening. I owe these folks a lot. 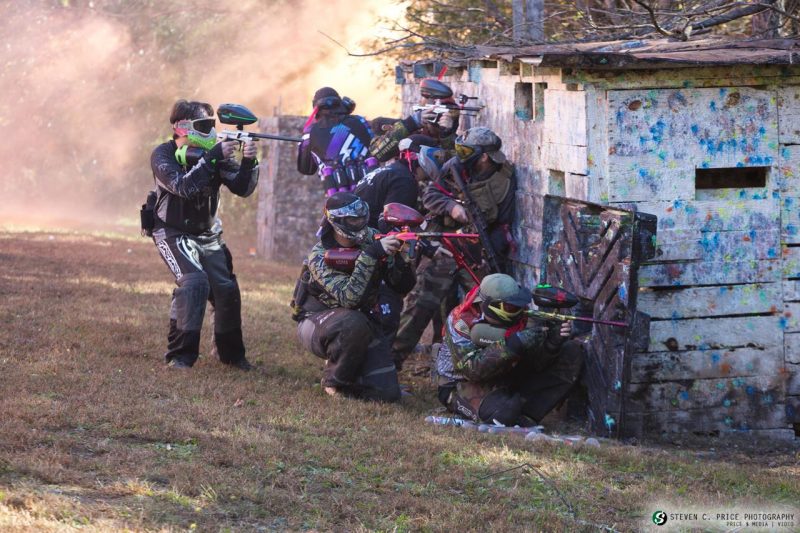 Why have 1 person behind a bunker when you can have 10?
What are your favorite things about the event as you run it?  What gets you geeked out about it?
Well, the small rule changes and other little things that will make the game different again for everyone and just being able to continue the great tradition that is Fulda Gap.

How did you decide on the Generals for the event?  What brought their names specifically to the forefront?  How do you guys work together to make it the best possible event for the 1400+ people that will be there?
Well the past commanders get first chance at commanding again. But we always try to have leaders that are in touch with teams and the paintball community for recruiting.

What changes did you make to the event this year, in rules or to the field?  Why did you feel that those changes were necessary?  What are you hoping that they accomplish?
There are changes to the field, some areas that had once been open had become choke points and they will be opened again. Some of the bunkers that have had diamonds on them for bunker tags will also be removed. This will make some of the play areas harder to take. Also the tanks can start on the field at game on this year. That should shake things up a bit.

And one final thing… some of the starting points are changing.  This will slow down the game some and provide for some awesome firefights. As to what they are you will need to take the safety briefing to learn about them.

What can be done as an organizer and promoter to make sure that the event is fun for everyone, from the officers on both sides to the kids that are borrowing gear and playing the event for the very first time?  How do you try to cater to the vastly different players at the event?
Well in an event this large, we try to get the unit leaders to keep in contact with all their players. This helps everyone have a good time. First time Fulda players need to follow the commands of their leaders or they will be lost. 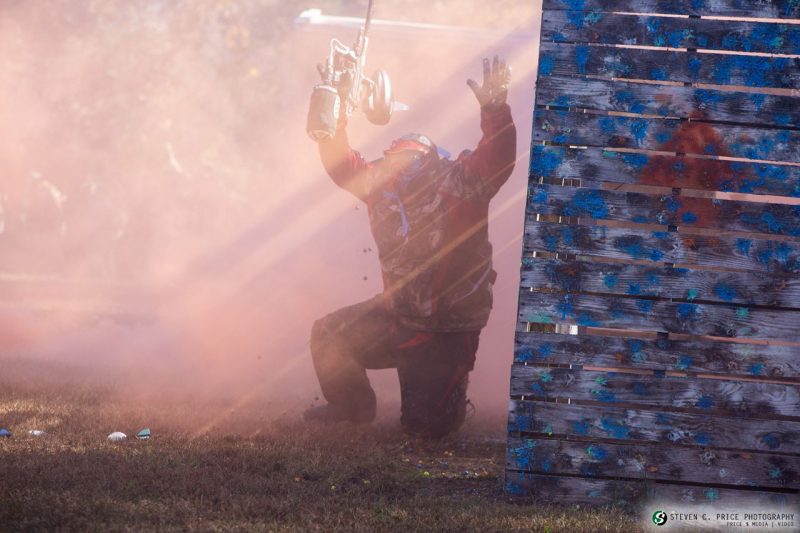 Yep. Yep. He got me.
What kinds of challenges does having tanks in the event add to it from your point of view?  For many players, it's an added wrinkle that helps make the game fun and memorable.  How does it affect things from your point of view, now that you're running the event and are responsible for everything and everyone on the field?
No other game in the country will have as many on field tanks as we will. Players need to read the rules not only for their safety but also to work with them. There is nothing like rolling on an objective with a tank.
​
What is your elevator pitch to curious players who have never played Fulda Gap, but would be open to it?  How would you sell them on coming to the event?  What would you say is can't-miss about it?
Well it’s been going for 15 years now and we will have 1500 players or more… it is the last game in the count where the producers don’t script the game. The cards fall where they will and you as a player can make a huge difference in the outcome of the game.

What do you hope people drive or fly away from the event talking about?  What is your ideal vision for the weekend?  What are the most important things for you for the event?
I want them to leave being exhausted, because they spent their time playing a hard fought battle with old and new friends. I want them to be talking about what they want to do again in 2022

Fulda Gap, Invasion of Normandy, and D-Day are and were the three biggest military style events taking place every year.  With Oklahoma D-Day's owner retiring, what advice would you give to anyone else trying to do an event like Fulda?  What would you tell someone else hoping to create or run an event like this?
The players are not only your customer, but your friends and paintball family. Listen to them and treat them like the family they are.

How can people learn more about the event?  Where can people go to get more information?
www.fuldagap.com and the Fulda Gap Scenario Facebook page.