Watch Out Yong Heng: A Challenger has Entered the Arena 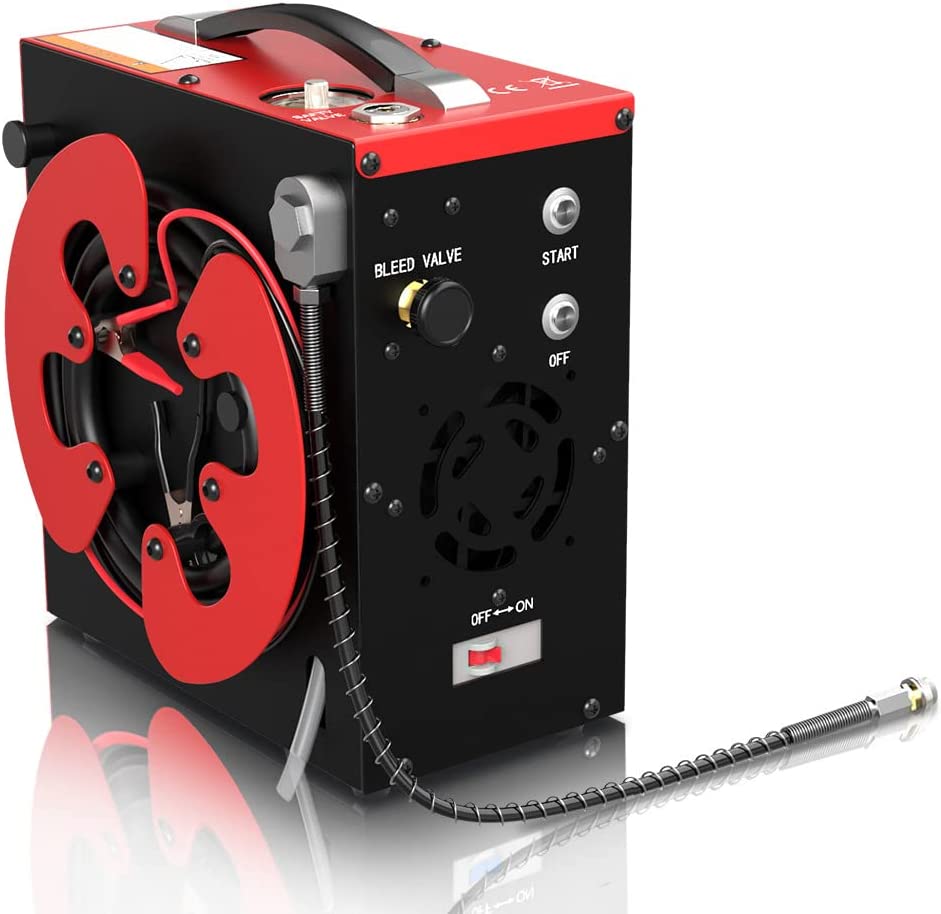 OooooooOOOOooooo, fancy stock image
If you live far from a field, tech guns, or just want to be able to fill your tanks at home, for the past half of the decade there have only been a couple of options.  You could get a scuba tank or you could use a Yong Heng air compressor (note: will be comparing the two extensively, so if you aren't familiar, read up here) to fill your paintball tanks.  The scuba tanks are big, bulky, and a bit tricky to move around if you don't have a large vehicle.  The Yong Heng compressors work well and fill tanks quickly, but do build up a ton of heat, need oil, and a large amount of water to keep cool so they don't eat themselves.

Recently, a new option has arrived for players.  That option is the GX Pump CS3.  And I'm going to walk you through my experiences with it. 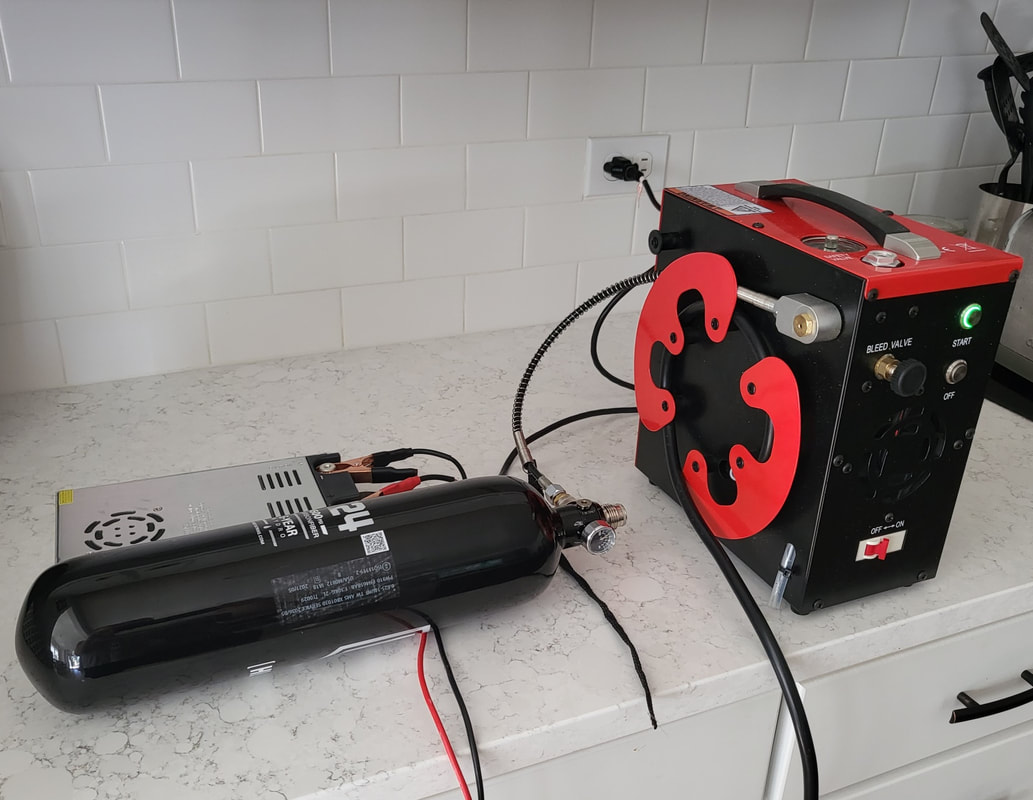 Very simple set up
So why even try this thing out?

I ordered this pump off Amazon after reading several reviews that generally seemed very positive, with the hope that this pump could perform near the level of the Yong Heng without the major drawbacks of the heat (I've burned myself of the metal pipes of the Yong Heng several times, because they get extremely hot and I can be a clumsy doofus) and the need to re-oil it regularly.  The other issue with them that I have had with them is if a seal goes bad anywhere within the system, kiss your ability to build pressure goodbye---and finding that leak can be tedious and frustrating.  When the Yong Heng works, it's awesome.  When it's experiencing an issue---you want to punt it across the room.  Sadly, you can't punt them because they're heavy and metal.  No one wins.

Anyway, back to the subject at hand.  The GX Pump CS3 came in extremely quickly.  It came to me from Amazon directly within a couple of days, as they were technically the sellers.  Nice to not have to wait for shipping from China.

What you paid to get
What's in the Box?!?

The first thing that I noticed is that the box was light---very light in comparison to the Yong Heng.  The CS3 weighed about half of the weight, which is kind of incredible.  And there wasn't a whole lot in the box to take out.  There was the pump itself.  There was a conversion box that allowed it to be used with a wall plug.  And a 3 pronged plug that connected that box to the wall.

The pictures above are very accurate representation of what you get.  It's a pretty simple box as a compressor, but there were a few things that stick out right off the bat.  The first thing that I really noticed was the giant wheel of electrical chords that ended with jumper cables.  For me this thing is never leaving the house, and honestly I cannot imagine it ever will for most paintballers for reasons that I'll get into later.  Those jumper cables attach to the conversion box, which in turns gets it's own cable and plugs into the wall.  I just walked you through the entire set up process, by the way.

The second thing that I noticed was the pressure hose on a swivel.  The system has an internal filter, so you don't see one on the outside.  Anyone who has a tank and plays will recognize the quick disconnect that will go onto you fill nipple.  And this one works just fine.

Outside of those things, you'll likely notice the clear rubber hose that points down at the bottom of the system, and the pressure gauge.  The pressure gauge reads the pressure (I just blew your mind, didn't I?), while that rubber hose is actually the pressure release hose (it blows out moisture and oil that builds up during use, along with air pressure).  If you have run a Yong Heng, it will remind you of the pressure blow out screws on the sides of that machine.  Same idea, different execution.

The other things that you'll see are the buttons and a switch, which consist of two sets of on/offs, and air fans.  The fans blow air both in and out of the unit to help cool it.  The switch toggles the entire until on and off, while the buttons start the compression and end it.  The very last thing you'll see is a the pressure relief screw, which is what you'll need to use to allow for the release of built up pressure in the system itself.  Again, this should be very familiar to those with previous Yong Heng experience.

You may have noticed a few major differences from the Yong Heng already---no external, well, anything.  No water.  Nowhere to put in oil.  No pipes to burn my dumb ass.  No external filters.  All of that is either not necessary or inside of the unit itself. 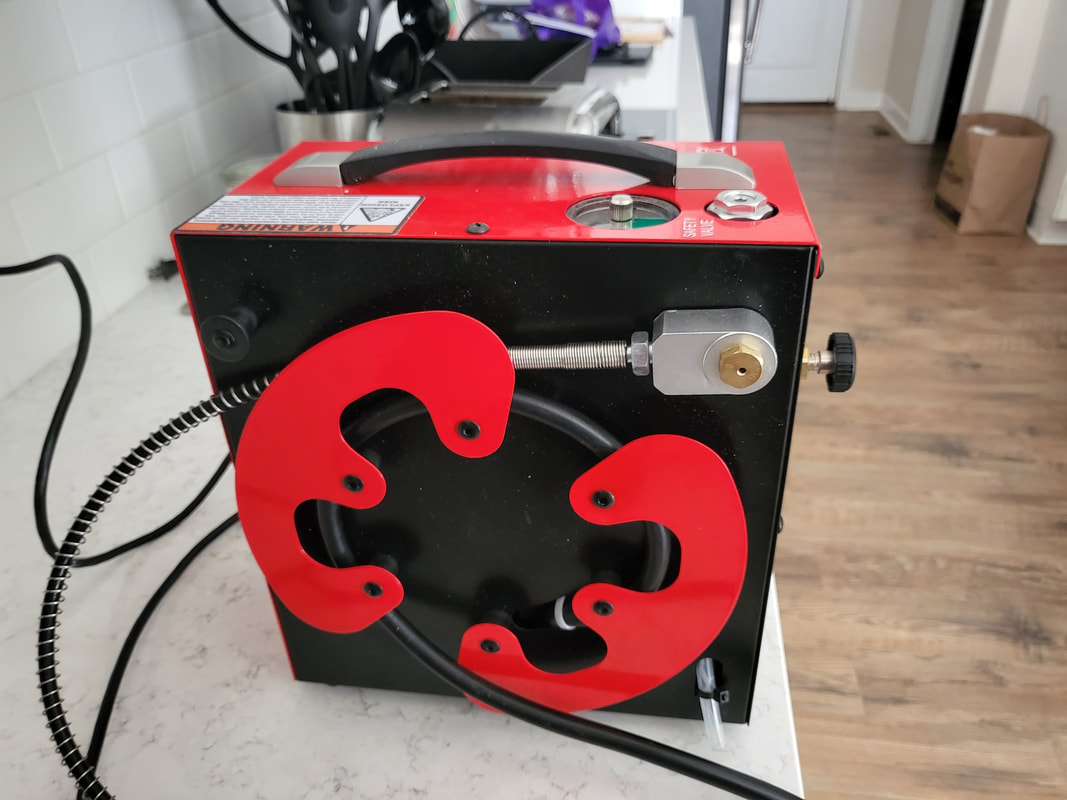 Side profile with, and these are technical terms, swinging hose thing and wheel and electrical cord thingies
How do you work this thing?

Ok, so after you set it up, how do you use it?  It's moronically simple.

Once you have it out of the box, clamp those gator jaws/jump cables on the pegs on the conversion box, and plug the conversion box into the wall.  Grab your tank and connect it to the steel braided hose.  Flip that switch and get the unit turned on.  Press the Start button.  Then screw in that pressure screw.  There.  You're done.  You're filling your tank.

When you do this, you're going to immediately notice a very big difference between the CS3 and Yong Heng.  It's much, much quieter.  As is you can hold a conversation without yelling.  It's not silent, but it's not blaringly loud either.  I had to raise my voice slightly to talk to the wife, but that's it.  And she couldn't tell it was on from one floor up, which is a drastic change from my Yong Hengs.

The other thing that you'll notice is that it's not as fast as the Yong Heng.  I would put the fill speed at about half to a third of the fill rate of a Yong Heng.  It took around 25 minutes to fill a standard 80ci 4500 psi tank.  While that's definitely not fast...it's also not slow by any means.  And it does the job in filling to pressure.  But this is also why I doubt many paintballers are likely taking this to the field unless they are playing outlaw with no other options.  That's not super fast, and definitely not what I'd want to do if I was going to fill multiple tanks while playing. 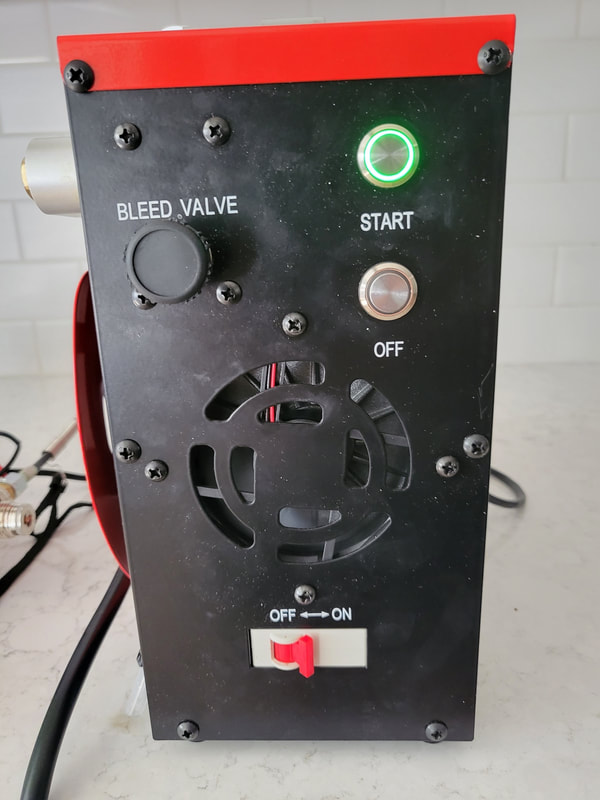 I mean, if you can't figure this out, working on your own stuff may not be for you
When you're done getting to pressure, you'll need to unscrew the pressure screw.  You'll get a blow out of that rubber hose that seems to be oil, water, and air.  I also noticed what seemed like some of that when I had the machine on and had the fill whip on in my hand. That led me to believe that the internal filter may not be entirely enough to keep that out of the tank.  To combat that, I plugged in the gold filter that I also used with the Yong Heng.  It's an oil-water separator, and it seemed to clear up that issue entirely.

And that's the entire filling process.  It's not complicated, not loud, not dealing with anything scalding hot, and gets the job done. 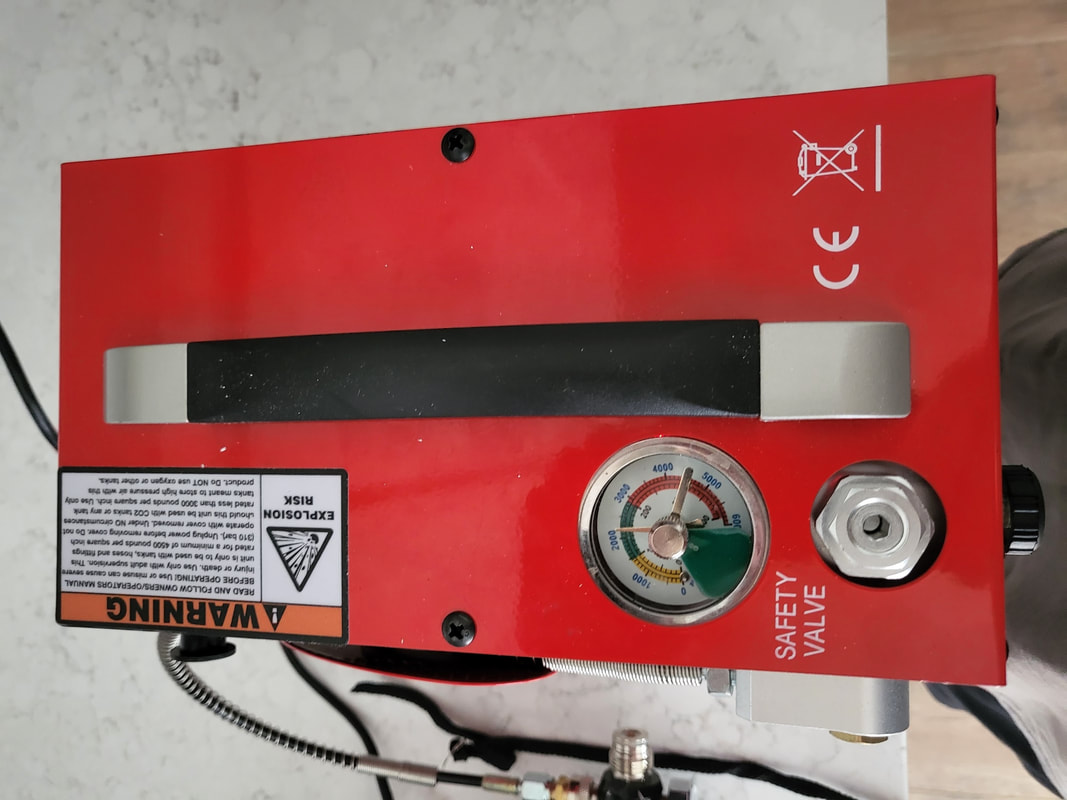 There are a few other things to know if you're looking at this system.  The makers of the CS3 do not recommend going over 30 minutes on filling without giving the system a cool down of around 20 minutes.  I didn't test this because, well, I want mine to keep working, so I'm just going to go ahead and trust them on this.  The Yong Heng's makers recommend the same, and it seems like a good rule of thumb with the home-based compressors in general.

There is also a pressure stop built into the machine, meaning you can set the pressure and walk away.  I would recommend walking back to stop it prior to it hitting that stop, because stopping a compressor loaded with pressure is a great way to shorten it's lifespan, but you can do (try to stop it early, and release the pressure by unscrewing the knob for that prior to stopping the machine and turning it off).  So that's a nice added safety feature for you that comes standard.

And if you're looking to fill larger tanks like my absolute beast of a 124ci, used for gun tech-ing, expect it to take multiple fills.  I didn't see this as an issue, since the machine is so quiet that I could do those fills while literally watching a show in the other room or while tuning a marker, but some people may get butthurt.  And that's okay.  We all get butthurt over different things. 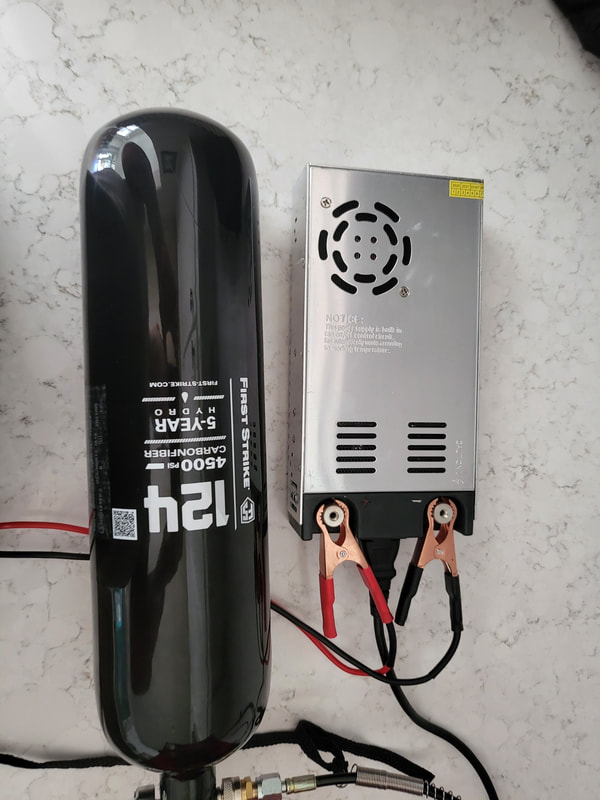 Great bottle to tech with. Terrible for playing unless you're using a remote or are 8' tall
Should I buy it?

This is a tricky question, because I am not you.  So let's look at the Pro's and Con's.

Pro: Reasonably cheap compared to large compressors, does the job well, quiet, simple set up, doesn't require maintenance, no oil/water/chance of burning me, less hidden set up costs (see: no oil, but would highly recommend a secondary filter), reasonably fast, all electrical, technically mobile use (although, again, I can't see that being a big selling point for most), takes up a lot less space than most compressors

Con: Not as fast as the Yong Heng, more expensive than the Yong Heng, not likely to fill extremely large tanks in one sitting, would highly recommend an oil/water separator (so some extra expense)

In the end, it suited my needs well and has been a pleasant surprise in helping me fill my tanks at home without being obnoxiously loud and with minimal maintenance.  So I am glad I got it, and will be using it instead of my Yong Hengs.  It's a quiet, easy system to use, tucks away on my work bench, and does a great job at the one thing it's supposed to do.  Fill tanks at home. 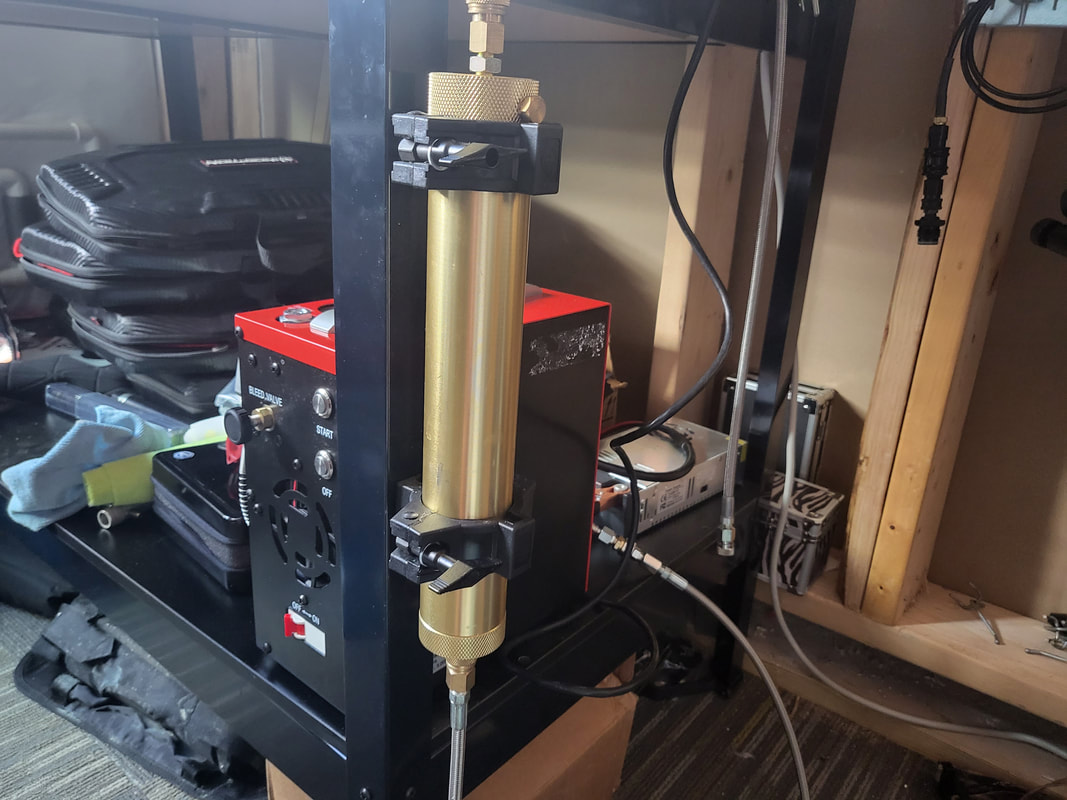 My set up, nicely tucked into the small corner of the bottom of the workbench