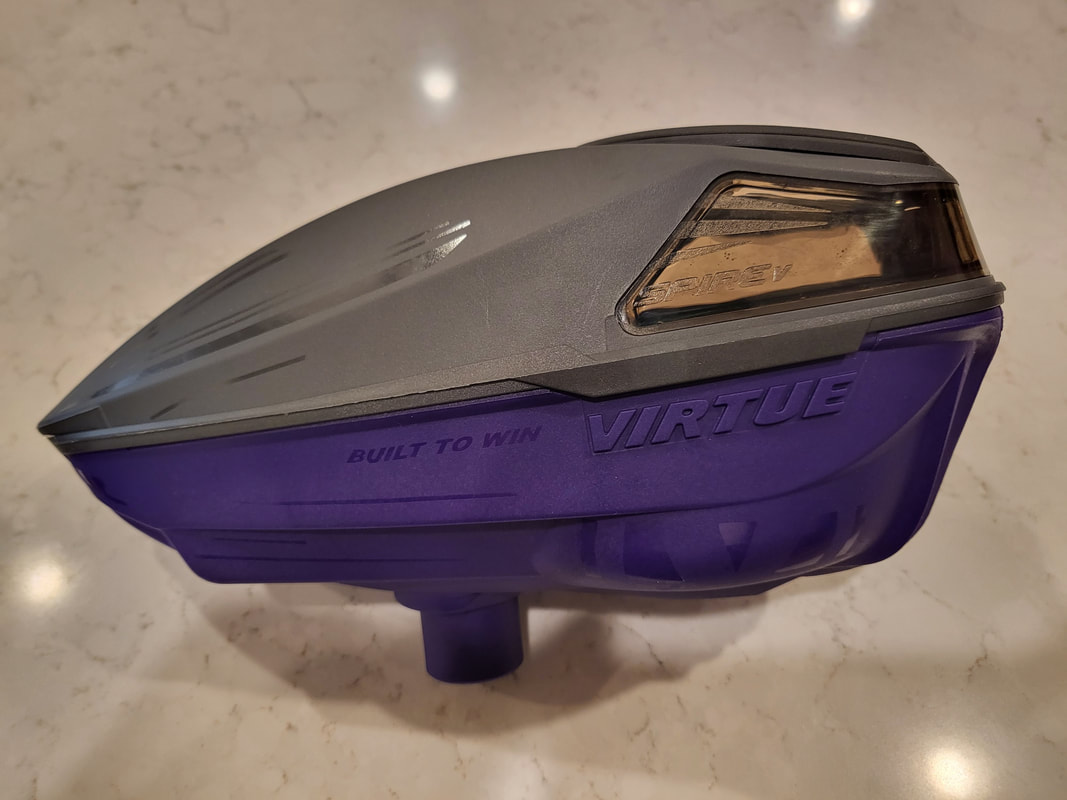 Virtue's new Spire V
If there's an area of the paintball marketplace that has been both dominated by a couple of groups, yet been getting more and more entries, it's the loader market.  There are several options at price points ranging from sub-$100 to upwards of $300 fully loaded, and all to do the same thing for the player---put a ball into your breech reliably.  One of the two dominant brands has been Virtue with their Spire and Spire IR series, with the Spires being their high level option for years now.  This is their most recent release, the Spire V. 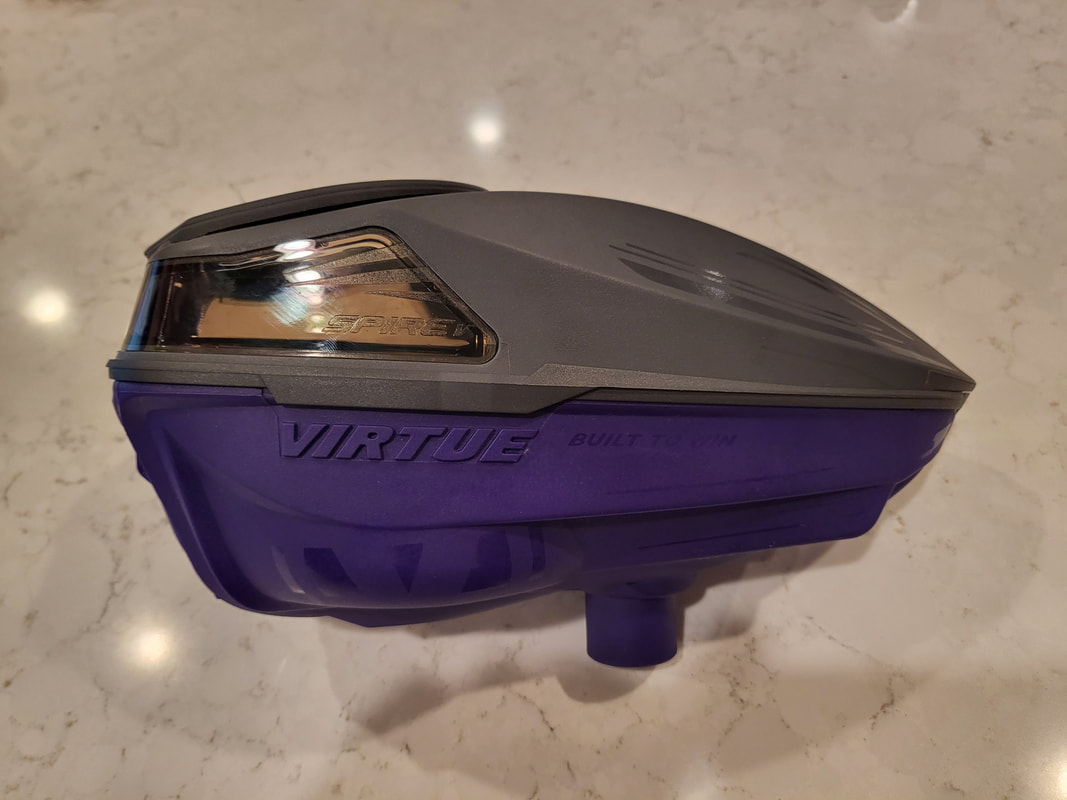 The other side of this color swap, done for me by the good people of Punisher's Paintball---who I love. Great customer service.
Gimme the Deets
The Spire V really is a continuation of a lot of the things that the IV started.  It operates as a force-fed loader, just like the IV.  However, it starts in a very different way.  Instead of there being a sensor that starts the inner tower once it feels movement like the previous Spires, this Spire instead uses eyes to sense paint in your ball stack (editor's note:  heh).  When your balls move (editor's note:  hehe again), the loader senses that, and sends full force to the tower/cone/spire inside of the loader to spin, and force paint down the stack.   Spire IVs did this as well, however, the cone didn't get full power immediately, and again, used a different sensor.

It can also sense when there is a jam, and toss it in reverse.  This means that you shouldn't get many jams like rotors are known for, and that the feed system is gentle on paint.  These have been selling points on Spires since they came out, and for the most part the loaders have delivered there. 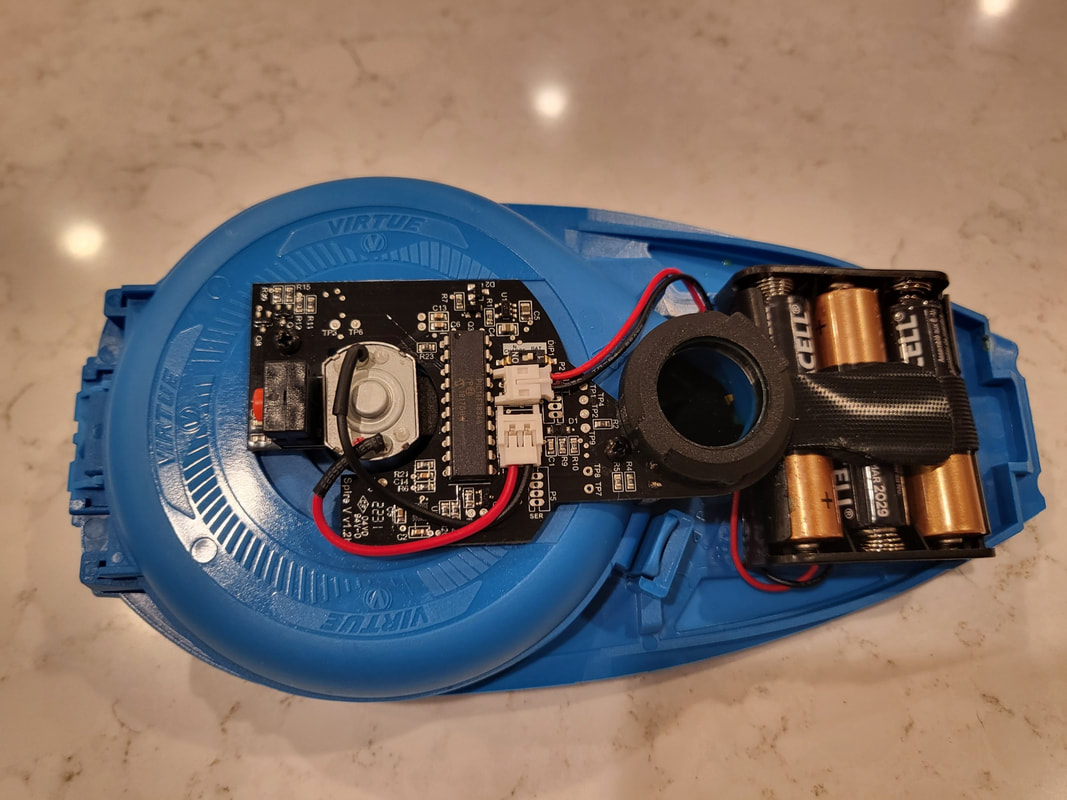 The new board and eyes, and same battery harness as previous models
Idiot-proofing
Let's talk about the brains of the operation.  The board has been dumbed down, and frankly I'm all for that.  The board has no adjustments beyond "on" and "off."  There's nothing for you to adjust, and no options to play with.  If you want to tinker with settings, this isn't the loader for you.  If you want to press a button and then not do anything until the end of the day, you're in luck. 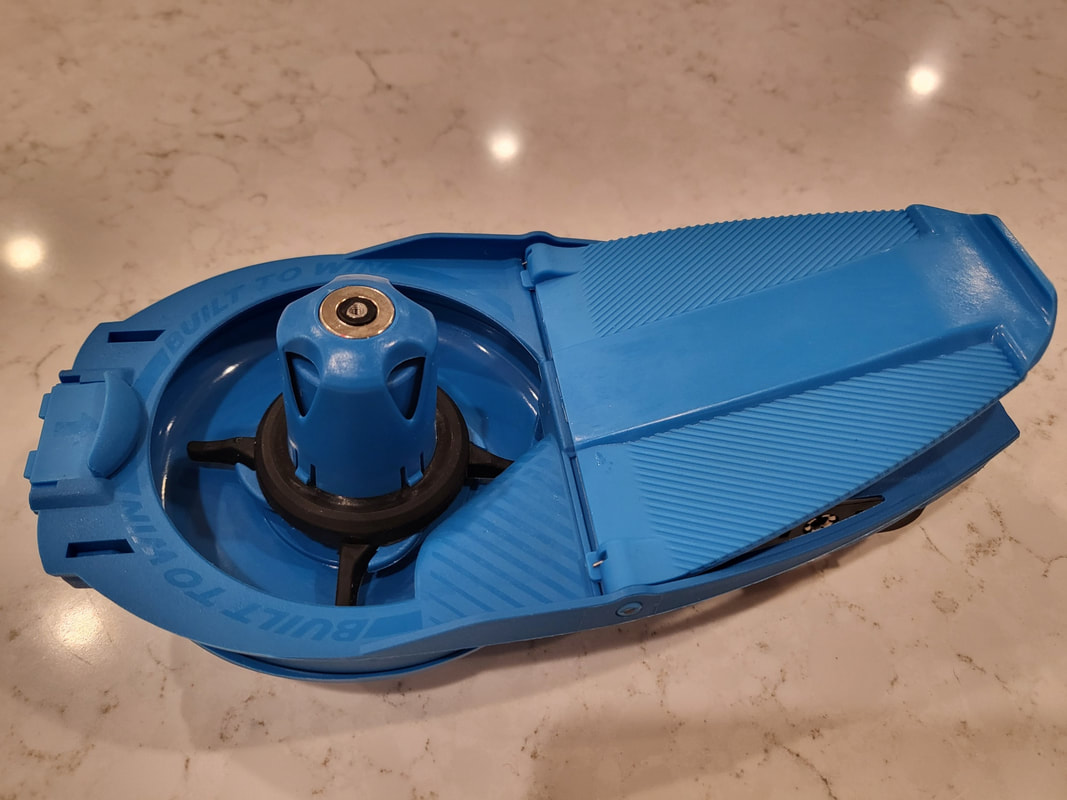 Ramp comes standard, because what kind of cheap bastards would make you pay for something that everyone's used for over a decade
What's in the box?
What else comes standard?  What should we know?  Well, a ramp is standard, because it should be and is on almost every loader made for the last decade.  The Spire V also comes with a speedfeed, which is nice considering previous generations didn't do that, even though the company made a big part of it's name in speedfeeds a lifetime ago.  It also comes with an extra rainlid, which can be vital if you're playing in rough weather, and an extra finger for the speedfeed should you break one. 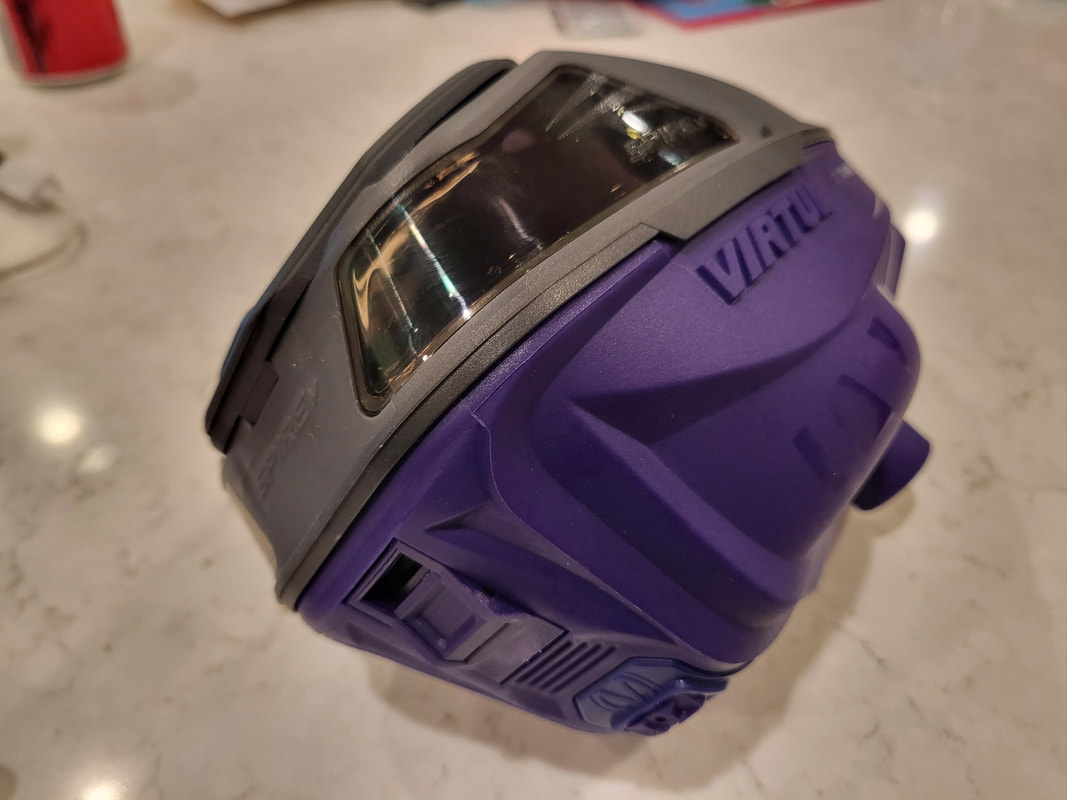 Lock it up
Heading back outside
The shell of the Spire V feels very similar to previous generations, and should take a licking and keep on ticking.  The speedfeed locks in well, and shouldn't be popping open.  Speaking of popping open, that shouldn't be a problem like it was on the Spire IV.  If you had one, you knew that they were notorious for occasionally being a big boy deciding all by themselves to just open up and spill your paint all over the place.  Well, Virtue did their version of childproofing and put a lock in place that should now physically make this almost impossible to manage.  Dumbing down seems to be a theme here, and frankly that's probably for the best.

The loader opens and closes in a very similar way to previous Spire models, with a central split and front mounted hinge.  They also are color kit ready, with there being a central ridge that you can swap for color highlight, and windows that can be swapped out for that extra color pop on the loader.  That's a plus for people like me who also like the make their gear look good while playing. 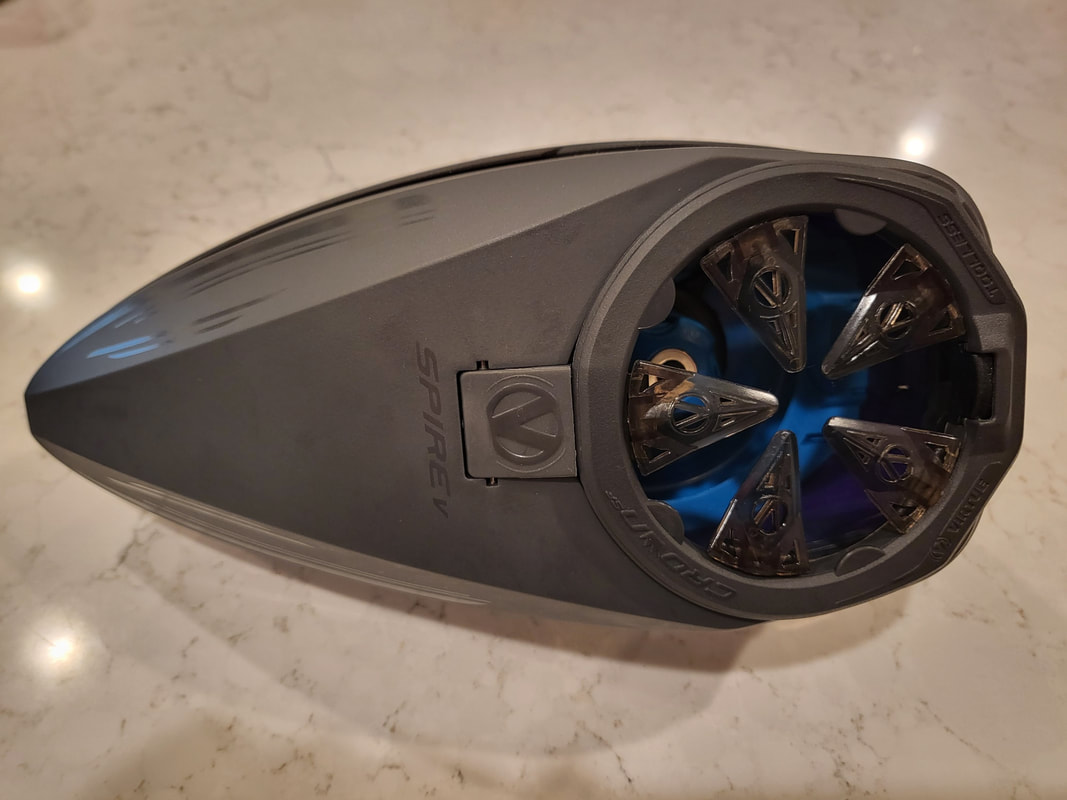 Balls go in passed the fingers
I feel the need...
It looks great, but how does it perform?  Well, I'll start with this.  If you have eyes on your marker, you're likely going to be happy if you're shooting at 10.5 BPS.  Your marker will be able to know when it can and can't shoot, when there is a ball there, and you're likely good for feeding and shooting strings with a Spire V on your whip.

If you're shooting a blind, slower marker like most autocockers, you're also good to go.  It will feed your marker paint in gently and you're likely going to be happy with a light loader that does the job just fine.

If you shoot a fast mech, which is the blind spot for Spires I through IV, this newest edition does exactly nothing to fix the issues of the past.  This was advertised as 15 balls per second.

I'm calling bullshit right now on that.  There's no chance in hell.  It may spike on occasion to get near that number, but it's nowhere close to it on a regular basis or when you're shooting a string.

I shoot R/T cockers that are consistent sewing machines ranging from 11BPS to 13.8BPS, with an incredibly small variance (around .3 BPS).  They shoot that way as soon as I pull the trigger and continue until I let go.  The Spire V absolutely does not keep up.  I tried it on a cocker set for 12.5 first, and immediately got jams and misfeeds whenever the cocker got in R/T mode.  The longest string at 12.5 it could handle was under 20 balls, or 2 seconds of shooting.

I put it on my slowest cocker, shooting around 11BPS.  Exactly the same issue arose.  It couldn't keep up, with misfeeds and jams happening immediately and consistently.  Again, it couldn't handle a long string for it's life.

If you're using a non-space/R/T capable mech and want to spend, then by all means go for it.  It's a nice loader that's fully loaded out of the box, which is nice.  That said, it's probably overkill in terms of cost for those using the slower mechs on the market.  You could go with an IR2 or LT-R for less than half the price and get a loader that will work just as well functionally for you.

If you're using a marker with eyes and want to get one, sure, again, if you want to spend then go for it.  It will work just fine, feed paint gently, and your marker will silently handle the slower paint feeds using it's eyes to keep you from blending.  You're going to be just fine as well.

However, if you're using a fast mech---no.  Hell no.  Stick with your LT-Rs, Rotors, or Z2's, because this thing ain't it for you.  It's the wrong tool.  If you can shoot over 10BPS, or get spikes above that, there is no way I would recommend this loader.  The ball needs to be there, in the breech, every pull to get consistent shots without a break or jam.  And it will not be for anyone shooting anything at the highest end of the mech scale.  I would say the same for Spires I through IV.  It's a blind spot for them, and they're still Ray Charles.  They just won't keep up.

So again, pick the right tool.  For lots of you, Spire Vs are a good option and one that can absolutely fit your game.  For some of us, it's a resounding no.  It will really depend on your set up as to if one might be worth it for you.